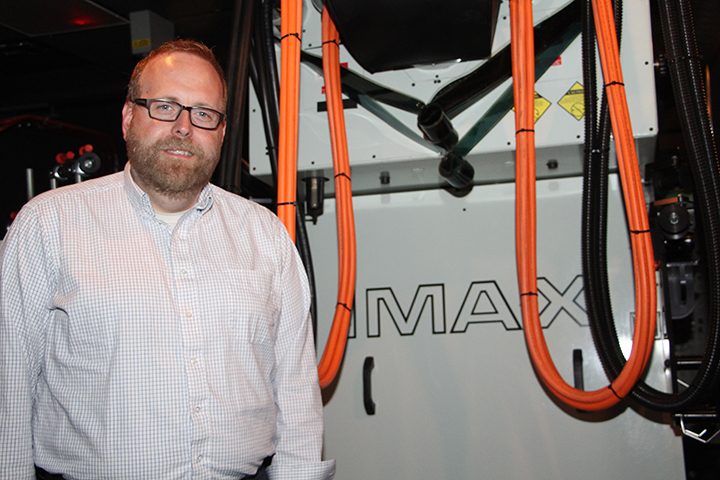 Craig Mince of Carmel works as IMAX theater manager by day and volunteers as artistic director for the Indy Film Fest by night. (Photo by Amy Pauszek)

“I do movies by day and movies by night, so to speak,” Mince said.

The Carmel resident’s full-time job is IMAX theater manager.  His pastime is a volunteer role as artistic director for the 14th annual Indy Film Fest, which is set for July 13 to 23 at the Indianapolis Museum of Art. It will include a combined screening total of 95 feature and short films from approximately 20 nations.

“I’ve scaled back a little bit this year. We try to shift around to give some depth to the bench,” Mince said. “In an all-volunteer organization, you have to do that to make sure people don’t get burned out and people don’t leave and take that institutional knowledge with them.”

Mince has been with the festival for nine years, also serving as program director and board president.

“(My duty) is making sure through the film selection process that these movies, outside of the juried content, align themselves with the normal artistic direction the festival goes in as far as content and style of films,” said Mince, a 1995 Carmel High School graduate. “I mainly deal with the studios.”

“Film is his day job and his passion,” Moore said. “He’s always talking about films.”

Mince said the films are usually about a year behind the hot topics in society.

“This year I haven’t been that involved with the juried content, but in years past it’s been comedy,” Mince said. “We’ve had a lot environmental films as of late. My guess is not this cycle, but the next cycle we’ll probably see a lot of political films. It’s really kind of catching up to the topic and subject matter that society is kind of interested in.”

The three categories are American Spectrum, which are domestic films, documentaries and world cinema.  Mince said in each category there is a feature length and short film.

“Some of them are still working on distribution, but most of them are movies you are not going to see in a theater for a few years at this point,” Mince said.

As IMAX manager, Mince operates and programs the theater.

“A lot of it is Hollywood, but we do a lot of traditional IMAX documentaries as well since we are inside the Indiana State Museum,” Mince said. “So we do a lot of institutional films as well. Right now the trend in cinema is to do a lot of 3-D, both from the IMAX and Hollywood standard.  It’s a 75 to 25 mix of 3-D to 2-D.”

Mince has been with the IMAX Theater since it reopened in the Indiana State Museum in 2002.

“I was working for a hotel out of college, and they had closed down the IMAX Theater to build the museum,” Mince said. “I’ve always been a big movie buff. It’s kind of been a passion of mine. But I was never thinking it would be a career for me. They had opened a couple of positions at the theater when they were getting ready to reopen. I jumped at the opportunity and loved it ever since. It’s a unique position because I get to do a lot of things that most people in this community don’t get to do, from programming and dealing with studio reps.”

Mince said he has a marketing budget, which allows him to market films, which a lot of theater chains don’t do.

“It’s a way of working in the movie industry without having to live in L.A. or New York,” Mince said.

“The movie takes place on an Indian reservation, so we’re partnering with the Eiteljorg (Museum of American Indians and Western Art) to have a panel discussion post-film,” Mince said. “There are tidbits and pieces of Native American culture living on a reservation. It’s a beautiful film.”

A Hoosier Lens award is given to any film that has roots in Indiana in both the feature and short film categories.

“We have a Grand Jury prize, which is a best of the fest, if you will,” Mince said. “In total, we give out a little less than $7,000 in prize money. For an all-volunteer organization,  that’s not too bad.”

Along with awards in each category, there is an audience award for feature and short.

For the full schedule of films, visit indyfilmfest.org. 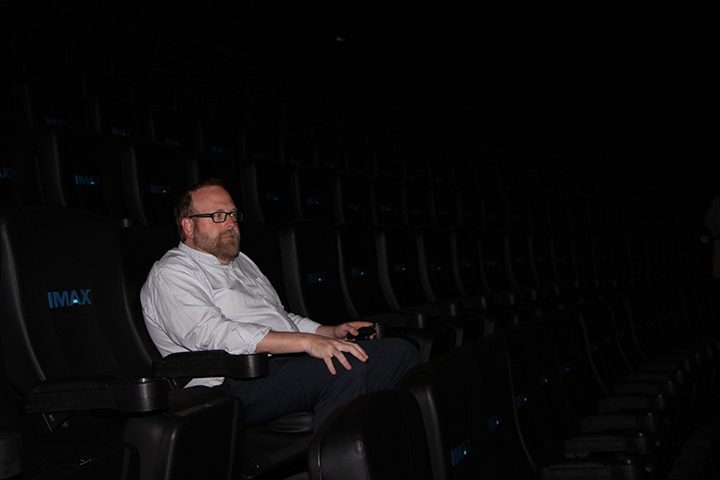 Craig Mince of Carmel sits in the IMAX theater at the Indiana State Museum. (Photo by Amy Pauszek)

Personal: Mince and wife Natalie have one daughter, Madeline, 7. Graduated from Ball State with a degree in marketing. Natalie, an event planner, volunteers with Indy Film Fest, helping making travel and hotel arrangements.

Favorite genre: “It changes regularly. It’s whatever piques my interest at the time. I’ve always been a dramatics fan, although recently I’ve become a fan of documentaries, just as an art form. But I like them all, horror, comedy, animated.”