You are at:Home»Night & Day»Beef & Boards now showing ‘Ring of Fire’ 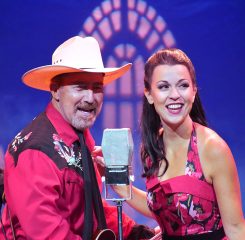 When Tim Drake heard Beef & Boards Dinner Theatre was doing a production of “Ring of Fire” he didn’t hesitate leave his comfy home in Minneapolis and head for Indy’s northwest side.

“It’s one of my favorite shows; I just love it,” said Drake of the musical portrait of the late country singer Johnny Cash, playing now through Aug. 13. “I jumped at the chance of doing it. The music is great. The roles are great. You can do a lot of things in it and play a lot of different instruments. It’s a high-energy show, and it’s just a lot of fun.”

Drake should know. He played in the three-month touring version of the show, which tells the story of Cash through the performer’s iconic songbook. Drake is part of the ensemble, which has no real stars. No one plays a specific character. Johnny Cash is the star.

“We all take turns of being different characters,” he said. “Sometimes one woman will play June Carter. Sometimes one woman is Patsy Cline. Sometimes somebody plays Johnny’s brother. Then, Johnny himself. And while you are doing that you might be playing the drums or the guitar. Or the washboard. The mandolin. Or the piano.”

The show’s cast includes actors who are also the show’s musicians, so they must be very good at multi-tasking.

“You have to have really, really talented people, and this cast is just full of it,” said Drake.

Drake is making his debut at Beef & Boards. He has spent most of his career in Minneapolis at the Plymouth Playhouse in shows including “Pump Boys and Dinettes,” “A Closer Walk With Patsy Cline,” “Guys on Ice,” “How to Talk Minnesotan,” and as the original Pastor Gunderson in “Church Basement Ladies.”

Drake’s father was in a country band, so as a youngster he was exposed to a lot of Cash’s music, which Drake described at autobiographical.

“You can tell about his life from beginning to end as he went through these various stages,” he said. “There’s his younger life. The death of his brother. His darker years with drugs. And his later life.

“And he played in so many different styles. From rockabilly to gospel to the blues. And his spoken work stuff was almost like today’s rap songs. And all the iconic hits are there. ‘Ring of Fire.’ ‘I Walk the Line.’ ‘Folsom Prison Blues.’ Plus a lot of stuff people probably never heard of. They are all great.”

For tickets and more, visit beefandboards.com.