You are at:Home»Current in Zionsville»Zionsville Town Council thanks Papa for years of service

For the last 13 years, Jeff Papa has been involved in Boone County government, serving in roles from the Eagle Township Parks Board beginning in 2003 to becoming Zionsville’s first mayor in 2015. 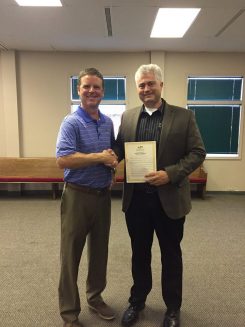 But that’s all about to change. Papa, an at-large member of the town council, is stepping down to accept a job in immigration law with Barnes & Thornburg, the firm that provides legal counsel to the town. At Papa’s final council meeting June 19, his fellow councilors thanked him for his years of service.

“You’ve done this all not for you, but you’ve done it for the greater good of the community,” Mayor Tim Haak said to Papa at the meeting. “You love the community. There’s far more things you’ve done behind the scenes that people don’t even know about. We know about them. We appreciate you. We wish you well in your next endeavor.”

Haak proclaimed June 19 as Jeff Papa Day and presented Papa with his favorite “breakfast of champions”:  Mountain Dew and Pop-Tarts. The council gave Papa a donation to Youth Enhancement and Training Initiative, a nonprofit he co-founded that launched an orphanage in Nepal and serves children in need in Indiana.

Papa thanked the mayor and councilors for the recognition.

“I appreciate everybody here and all of the hard work everybody puts in,” Papa said. “I know some of us have had differences in the past, but it’s always been for the best and finding problems in things we were doing.”

Papa joined the council in 2011 and spent time as its president and vice president. He also served on the Zionsville Safety Board, Board of Police Commissioners and the Eagle Township Board.

A Boone County Republican Caucus selected Jason Plunkett to replace Papa. His first council meeting will be at 7:30 a.m. July 17.