You are at:Home»Current in Carmel»Carmel Community»Indianapolis sues Carmel over 96th Street roundabouts 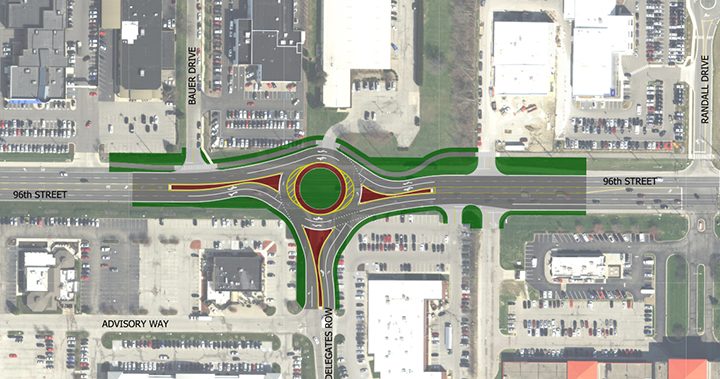 Carmel plans also call for four roundabouts to be built to the east at Hazel Dell Parkway, Gray Road, Delegates Row and Randall Drive. This image shows the planned new roundabout at the intersection of 96th Street and Delegates Row. (File image)

Indianapolis City-County Councilor Christine Scales won’t back off of her opposition to proposed roundabouts at 96th Street that straddle the county border. As a result, the City of Indianapolis has filed a lawsuit against the City of Carmel to prevent their construction.

The Carmel City Council approved an inter-local agreement on March 20 between the City of Carmel and Indianapolis to allow roundabout construction along 96th Street between Haverstick Road and Priority Way, planned for 2018. This doesn’t include four roundabouts to the east that Carmel wants to build at Hazel Dell Parkway, Gray Road, Delegates Row and Randall Drive.

In March, Scales stated in a series of e-mails to Current in Carmel, the reasons she is opposed to these roundabouts, including concerns that the roundabouts are not needed and will hurt retail.

“Looking at the schematics of Carmel’s planned roundabout placement on east 96th Street, it is not Carmel businesses whose properties will be most impacted by the planned roundabouts, but Indy’s,” Scales said.

Sue Finkam, president of the Carmel City Council, said she hopes this issue can be resolved before impeding any construction schedule but from what she hears the City of Carmel is proceeding as usual.

She said the process would be easier if Scales agreed to meet with Carmel city leaders.

“I’m disappointed because there’s no good reason to oppose these roundabouts,” she said. “It’s good for retail. It’s safer. And Carmel is footing the bill.”

Brainard previously said that although 96th Street is shared by both cities, state law requires that cities on the north side of such common roadways handle all matters of construction, reconstruction, improvements and maintenance.

“While this lawsuit was filed by the Office of Corporation Counsel for the City of Indianapolis, it seems driven by the City-County Council based on arguments made by one of its council members representing that area. Mayor Brainard and Mayor Hogsett have a good relationship and are working toward a solution,” stated City of Carmel Director of Community Relations and Economic Development Nancy Heck. “We have previously, as a courtesy, entered into inter-local agreements for major improvements on 96th Street. However, when the Councilwoman from this district in Marion County refused to discuss it with us, or bring it to the City-County Council, the City of Carmel had no choice but to proceed. Every city in Indiana has an absolute obligation under Indiana state law to construct, reconstruct, operate, maintain, improve, police, plow, fill chuckholes and otherwise improve all of its roads on its southern boundary. Carmel has been doing this on 96th Street for 30 years.