You are at:Home»Current in Carmel»Carmel Community»Carmel firefighter dies after battle with cancer 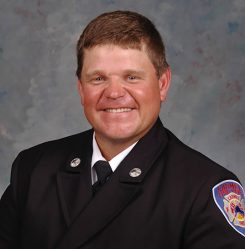 It was Robinson’s second bout with cancer. He beat colorectal cancer in 2009 but it came back in 2016. CFD crews and supporters would display “robostrong” in honor of Robinson during his fight.

Robinson had been with the department for 18 years, most recently with Station 44. He was active in the community and coached fifth and sixth grade football players in the Westfield-Washington area for 16 years.

Renee Butts, a CFD engineer, said she knew Robinson as a coworker, friend and coach of her son’s football team. She said he coached her son when he was 11 years old. Her son is 28 now and still remembers Coach Robinson.

Mark was a 1984 graduate of Westfield High School and was a firefighter for the City of Carmel Fire Department for 18 years.  He attended Northview Church and had previously attended Six Points Church.

Robinson was born in Noblesville and graduated from Westfield High School in 1984. He is survived by his wife Jamie and their four kids: Jordan, Brock, Austin and Jenna.

“Mark and Jamie were able to celebrate 30 years of marriage this year,” said CFD Chief David Haboush. “Throughout their journey Mark had a deep appreciation for the Lord and his family. He was a devoted and loving husband, father, grandfather, brother, uncle and son. Mark spoke often about how blessed he was and the wonderful life he was able to live.”

Haboush said Robinson’s brave fight against cancer was an inspiration to others.

“Mark was a fighter and his tenacity proved to serve him well during his fight with cancer,” Haboush said. “He loved his family, the fire service, his brothers and sisters at CFD and the Westfield Community. Even when his life was coming to an end, he spoke of how blessed he was to have the last 9 years after beating cancer the first time… Mark’s life is a great example of a life well lived.”

The funeral procession will arrive at 12:30 p.m. on June 24 at Westfield High School Auditorium, 18250 N. Union St., in Westfield, where services will begin at 1 p.m. Doors will open for the public at 12:30 p.m.  The family will receive friends from 2 to 8 p.m. at the auditorium following the service.