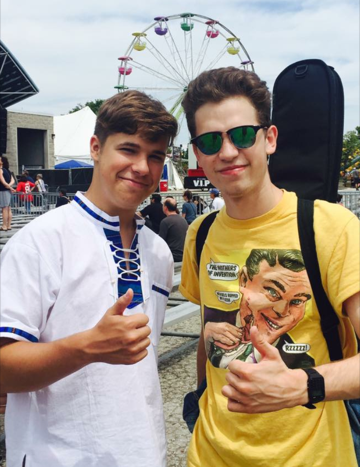 As a member of the Carmel’s School of Rock band, the 2017 Carmel High School graduate will be appearing in the Summerfest, a large music festival in Milwaukee in July, for the fourth time.

“It’s the most fun and different thing that I can do all year,” Konkoli said. “You get to meet a bunch of new people and have the same interest. It’s a super cool experience. This will be my last School of Rock gig ever.”

The students will perform at the Rave in Milwaukee July 7 with participants with School of Rock programs from the U.S., Canada, Brazil and Mexico. Elyse Causey, the Fishers school general manager, said there will be 69 bands from 34 different programs.

‘This will be our fifth year going and bringing bands to perform, we started bringing groups the very first year School of Rock started the event, in 2013,” Causey said.

Causey said the students will be spread out throughout the Summerfest grounds July 8 and 9. The School of Rock bands perform from approximately noon to 4 p.m., and then stay on the grounds to watch national headliners performing on the same stages they had.

Konkoli and 2017 Hamilton Southeastern graduate Justin Blanner, a guitar player from Fishers’ School of Rock, are in a band called Nanook and the Weightlifters.

“My first Summerfest was a real revelation for me as a musician,” Blanner said. “I had played quite a few shows by that time but this showed me what it really meant to be ‘good.’ Over the past few years, the festival has been one of the best ways to gauge how we’ve improved as a group and as individual performers, but it’s also always reminded us what separates the boys from the men. Every year we go back to Milwaukee and when we get home we start working hard, and the feeling of clocking in hours of hard work is one of the most satisfying parts of being a musician.”