You are at:Home»Current in Carmel»Carmel Cover Stories»Creative for a cause: CHS student makes dress, aims to buy wheelchairs with recycled bread tags 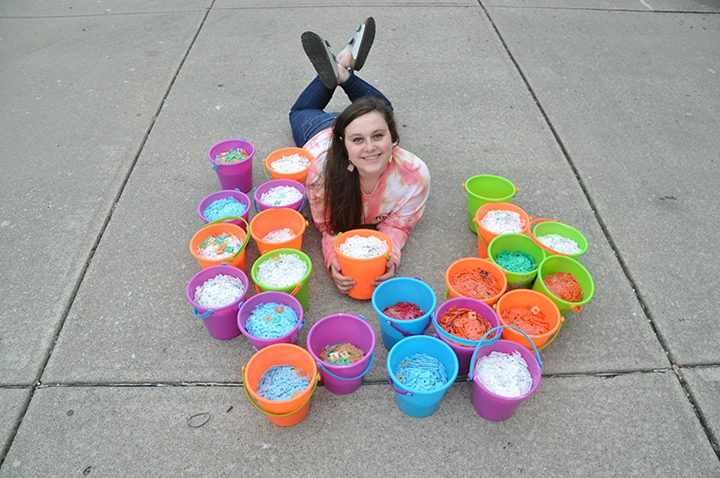 “I went to Five Guys and they had all their breads laying on the counter, and I saw one of the employees throw the tags (plastic squares for bag closures) away. It sparked an idea to make a dress out of them,” said Rothchild, who will be a Carmel High School senior in August. “I get my ideas the weirdest ways.”

For the Family, Career and Community Leaders of America state competition, she has made a dress the past three years for the recycle and redesign division in the STAR (Students Taking Action with Recognition) competition.

Rothchild, 17, faced some doubters along the way, which fueled her desire.

“I had a lot of people telling me it would be impossible to collect enough bread tags to make a whole dress,” Rothchild said. “I just think you should never give up. I’m going to follow through. I’m going to be determined. I like to prove people wrong. It made me want to work harder.”

It took approximately 5,000 bread tags and 42 hours to make the dress.

“We were learning about the 1920s in history, so it’s kind of a flapper dress,” Rothchild said.

The greater purpose for the collection is her nonprofit, Danielle Cares for Chairs, a registered 501(c)(3). She has a Facebook page with that name and a website, daniellecaresforch.wixsite.com/daniellecareforchair.

“I can take the bread tags to a recycling plant (Plastic Recycling Inc. in Indianapolis),  and in exchange they will give me (money) to buy wheelchairs,” Rothchild said.

“My goal is to get into the schools and have it expand all through the U.S.,” Rothchild said.

Rothchild has collected more than 100,000 bread tags. The tags are in buckets and taking up a lot of space in her house.

She is hoping to purchase her first wheelchair by the end of the summer. She estimates it will take 160,000 bread tags to purchase a standard wheelchair and more for a custom one.

“Danielle is a go-getter,” said Nancy Spencer, the CHS FCCLA adviser. “When she sets her sights on something, she definitely reaches for it and makes it happen. She just has so much energy.”

Rothchild said her idea for the nonprofit was inspired by a South African woman who collected bread tags to buy wheelchairs.

The Cleveland Indians and the Indianapolis Motor Speedway have begun bread tag collections for her. The Carmel Police Dept. serves as a drop-off spot. She also has agreements with restaurants and hospitals in Indianapolis, Cincinnati, Cleveland and Chicago.

“Danielle has a true passion for helping others,” said Amy Skeens-Benton, CHS assistant principal. “CHS is so impressed with her fortitude and perseverance in accomplishing her goal.  We are excited to see just how far she goes.”

The experience is teaching her the art of persistence.

“I learned you need to follow up with people,” Rothchild said. “I learned about overcoming rejection, and following through taught me a lot of lessons. I’ve learned it’s harder for people to say no to my face.” 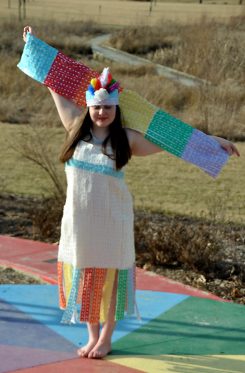 Danielle Rothchild models her flapper-style dress made out of bread tags. (Submitted photo)

Personal: A member of CHS student government, member of Jewish Youth Group and National Honor Society. Works at KidsZone day care at the Monon Community Center. Rothchild suffered some hearing loss as a child because of several ear infections.

“She has a slight speech impediment that she works hard to overcome,” said her mother, Debbie Rothchild. “Her TV class has helped her a lot with that.”

Future plans: Wants to major in entrepreneurship and minor in chemistry or environmental science.

Favorite class: TV as a junior, chemistry as a sophomore.

What she does to relax: “In the little free time I have, I like to hang out with my friends and watch Netflix.”