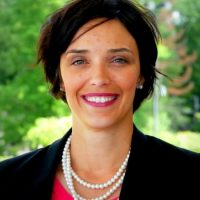 A 15-year veteran of the Carmel Clay Schools system was named the new principal of Smoky Row Elementary June 12. Lila Jay will replace Kim Barrett who retired at the end of the school year. Jay most recently was principal at Carmel Middle School.

Jay began her career at Carmel Clay Schools in 2002 teaching sixth grade English and Social Studies at CMS before moving into the role of Asst. Principal at Clay Middle School. A continued desire to gain elementary leadership experience for some time led Jay to consider the move to Smoky Row.

“After careful consideration, it was apparent to me that being able to serve in that capacity with a school community that I have already established rapport with, was a great fit,” she said. “I am excited to get to the know the younger siblings of some of our current and former Cougar students. In addition to that, having worked with Kim Barrett for the past seven years, I feel that I have a great sense of the established practices at SRE.”

Helping families feel a part of the many “firsts” that take place in elementary school is an important goal for Jay as she starts her new role.

“As an elementary parent myself, there are a lot of things I appreciate that the school does to help me feel a part of my child’s education, and I hope to be able to do those same things for our parents at SRE,” she said. “The teaching pedagogy is different as well. Our teachers at the elementary level teach all subjects and are expected to be curriculum masters in a variety of areas. Knowing that, my level of involvement in supporting teaching practices across all areas will look different.”

The search for a new principal at Carmel Middle School has started and an announcement is expected before school resumes in August.