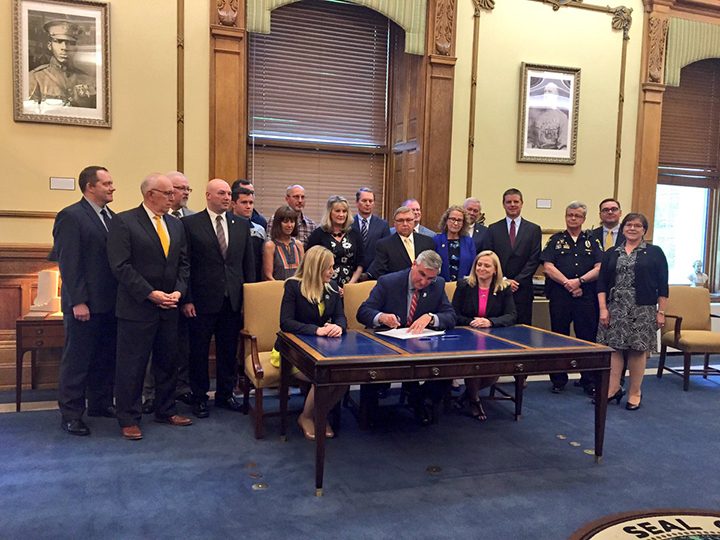 Gov. Eric Holcomb signed a bill June 1 that requires individuals arrested for felonies to submit a DNA sample to law enforcement. Several officials with Zionsville ties surrounded the governor as he signed the new law because they provided support and feedback throughout the legislative process.

Zionsville Mayor Tim Haak worked with sponsors of the bill, including Rep. Donna Schaibley, to voice his support. The bill passed the Senate 36-13 April 13 and will take effect statewide Jan. 1, 2018.

“(The law) will ensure law enforcement have the tools they need,” Haak stated in a press release. “This is a valuable and long overdue tool that will make communities in Indiana safer.”

The law has special importance in Zionsville. A DNA sample collected in Ohio allowed the Zionsville Police Dept. to identify and arrest Damoine Wilcoxson, who has been charged in the September 2016 murder of John Clements in the driveway of his Zionsville home.  He is awaiting trial for Clements’ murder and other charges and has been held at the Boone County Jail since Oct. 31.

In the past, Zionsville has relied on other states’ DNA collections.  ZPD Chief Robert Knox said Indiana can now contribute to the DNA repository.

“So many more DNA samples will be submitted and available for comparison, so this will be a huge asset to law enforcement in their efforts to solve crimes,” he said.

Knox said he is confident that being able to match DNA samples from crime scenes to those in a repository is essential in solving difficult cases.

“The likelihood of determining who the suspects are who commit crimes will be increased, making all our citizens safer,” Knox said.

However, opponents of the law, including several Republican senators, claim it is unconstitutional and a violation of protections of privacy and against unreasonable search and seizure. Indiana is the 31st state to pass a law requiring such DNA samples.

However, opponents worry that the law does not allow for the automatic removal of DNA samples in such cases. Instead, the individual must file a court motion for DNA removal.

Knox said officers are required to explain the right to DNA removal and provide instructions for doing so to an individual before collecting a DNA sample. He said the  requirement ensures law enforcement does not infringe on individual rights while collecting  samples. The bill requires those arrested for a felony to submit cheek swabs, fingerprints, photographs or other DNA data to arresting officers after being taken into custody.

As a result, Knox said the law will help keep the community safe while protecting the rights of individuals involved in a crime.

“I feel it will help keep Indiana safe by assisting in the apprehension of criminals,” he said. “(The law) will greatly increase our ability to solve crimes that have been difficult to solve.”

Read the bill at iga.in.gov/legislative/2017/bills/senate/322#digest-heading.