You are at:Home»Current in Carmel»Team rides in memory of co-worker

Jane Ransel had been determined to ride in 24 Hours of Booty, a non-competitive cycling event. 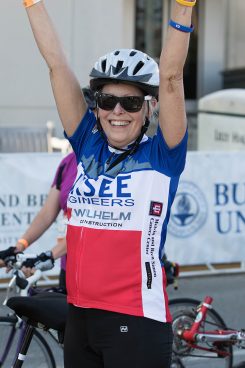 Jane Ransel, who died of pancreatic cancer in August 2016, participates in the 2016 24 Hours of Booty. (Submitted photo)

Her son-on-law, Spencer Lueders, founded the event (which changed its name to 24 Foundation in January) in Charlotte in 2002 to benefit cancer research. In 2012, the event came to Indianapolis. Ransel volunteered to work in the apparel shop. In 2014, she was diagnosed with pancreatic cancer. The 1970 Carmel High School graduate underwent chemotherapy every other week but determined she was well enough to ride in the event last year and did a few laps.

“She was a firecracker,” said Lindsay Nesbitt, a Spohn Associates co-worker.

Ransel, who was the marking manager for Spohn, died two months after the race of pancreatic cancer. Ransel lived most of her life in Carmel before moving to Westfield in 2014.

“She fought it and fought it,” Nesbitt said.

Scott Drake, who works for ARSEE Engineers and is team captain for Team ARSEE, will again partner with Spohn Associates and Wilhelm Construction. The 24 Indianapolis event, which benefits the IU Simon Cancer Center, is scheduled to start at 7 p.m. June 23 and end at 7 p.m. June 24.

“I met Jane at last year’s event and didn’t know her well, but I was able to see right away her enthusiasm and passion for the event,” Drake said. “It was contagious, and talking to her made everyone smile as a result. I was aware that she was battling a recurrence but was surprised to hear of her passing because of her energy at the event.”

Drake said he has lost several family members and close friends to the disease.

“Because so many people were willing to help while they were fighting, I feel like I need to do the same to help others,” Drake said. “I talk to a lot of people as part of my recruiting efforts for Team ARSEE and 24, and I have yet to run across someone that hasn’t been affected by cancer in some way.”