You are at:Home»Current in Zionsville»Community Foundation of Boone County makes its largest donation yet 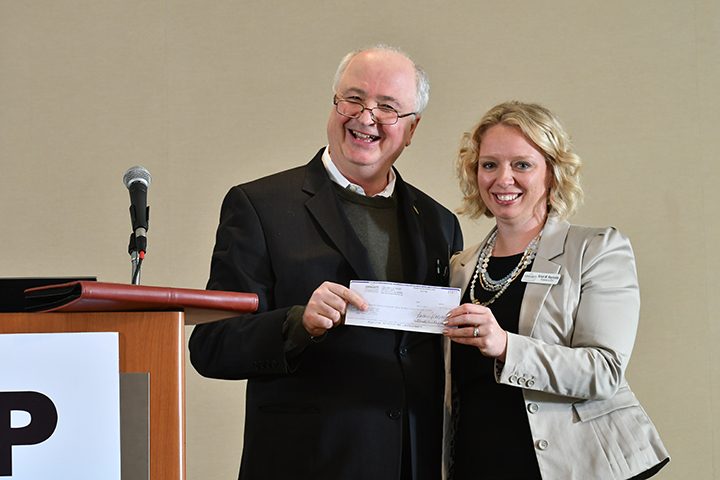 Phil Cubeta, assistant professor of philanthropy at the American College, accepts a check for $120,000 from Kristi Reynolds, CFBC president and CEO, during an event in California. (Submitted photo)

The Community Foundation of Boone County recently presented a check for $120,000,  its largest donation in its 25-year history, to the American College of Financial Services. The money was from a remainder trust set up by longtime Zionsville resident Elton Brooks.

“(Elton and Barbara Brooks) were really involved with a lot of different philanthropic organizations,” said Kristi Reynolds, CFBC president and CEO. “Elton, in particular, spent his entire life working to help people understand how to give back philanthropically.”

Elton worked for the American College of Financial Services, a nonprofit that educates students seeking careers in financial services, and helped create a program to assist financial advisors in teaching clients about giving back to local charities.

“(Elton) helped start a program called the Chartered Advisor in Philanthropy. It’s a certification to help you articulate to donors how to give back to their communities,” Reynolds said. “Many years ago he set up a fund with CFBC that upon his passing we would provide a grant to the Chartered Advisor in Philanthropy program at the American College.”

Elton died in December 2016. His son, Paul Brooks of Zionsville, wrote a letter discussing his father’s generosity that was read at the check presentation.

“Paul wrote a beautiful speech about how his dad was a giver and philanthropy was so important in helping people become more successful in business,” Reynolds said. “We were able to talk about that in front of a group of 250 like-minded financial service people from across the United States. It was really heartwarming and an honor for me.”

The money will go toward scholarships for the Chartered Advisor in Philanthropy program.

“It will help others to be able to go through the program and learn about philanthropic giving,” Reynolds said.