You are at:Home»Current in Zionsville»Big Dave makes way for female duo at Zionsville deli

August will mark one year since Syd Latina and Carol Plopper took over Big Dave’s Deli after spending last summer observing and learning the business from Dave Chapman himself. 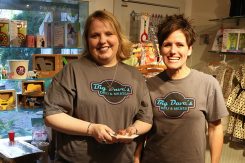 The women previously worked together in the retail industry. The possibility of buying Big Dave’s has been on their minds the past few years.

When they reached a “fork in the road” with work, Latina said, they decided to do it now or they’d never do it.

“It was either going to completely close or we were going to do it,” said Plopper, a Zionsville resident. “We couldn’t stand the thought of Zionsville without Big Dave’s.”

The new owners’ goal is to preserve the identity and history that Chapman created in his 17 years of ownership.

“We didn’t want to change that much,” Latina said. “We figured if we changed it then it wouldn’t be the same.”

Latina, who lives in Noblesville, always had an interest in smoking meats and butchering. Plopper bakes the muffins and cookies daily.

Latina finds it interesting how business demands change throughout the year, whether it’s an increase in boxed lunches in late May or tenderloins at Christmas.

In the future, Latina and Plopper want to increase the special events side of the business. Although they don’t cater, they produce party trays and boxed lunches. They also want to grow the meat market, which sells items like ribs, steaks and brisket in addition to Boar’s Head cold cuts.

Chapman is still a frequent presence in the deli.

“This is his baby,” Latina said.