You are at:Home»Current in Westfield»Westfield Intermediate School unveils new courtyard, dozens in attendance for grand opening 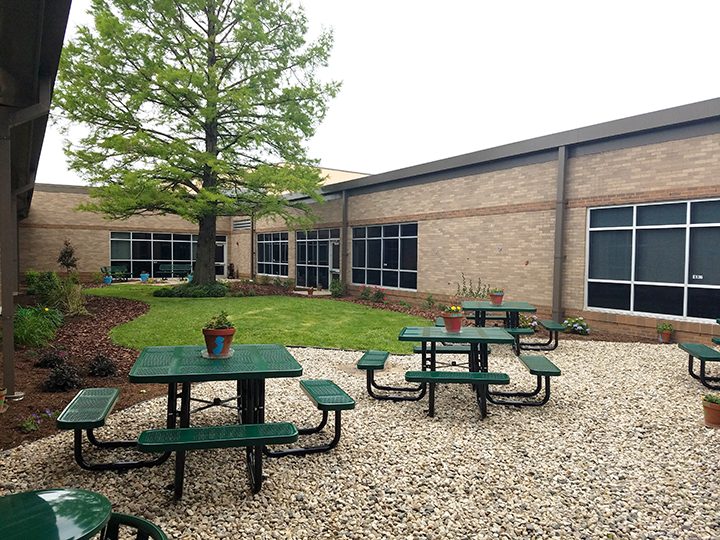 Groups of parents, students and teachers gathered inside of Westfields Intermediate School, where administrators dedicated a new courtyard May 24.

“We have been planning this for nine months. Your kids made it what it is,” Mary Robison, a fifth-grade teacher, said during the dedication

The new courtyard was slated for renovation after students began asking to make a change.

“It started with a brainstorming session, which bloomed into something more,” Robison said. “It is very stunning, even on a rainy day.”

A fifth-grade student even wrote Supt. Sherry Grate, urging her to help with the plans for the courtyard. Eventually, Grate and WIS Principal Annette Patchett approved efforts to renovate. Nearly $5,000 was raised for the project, entirely from donations.

A team traveled to Oak Trace Elementary for ideas on how to incorporate a prepossessing representation for the future courtyard before a final blueprint was proposed. Sodexo members moved decaying tables and assisted in removing concrete from around a tree. A steep discount was given to WIS from Westfield-based Sundown Gardens in cooperation with a number of parents and teachers.

“(We are) unbelievably gracious for (the) sacrifices of many.” Robison said. “It was all a team effort.”

“Now, a whole class can go outside and learn. It is such a beautiful area,” Robison said.