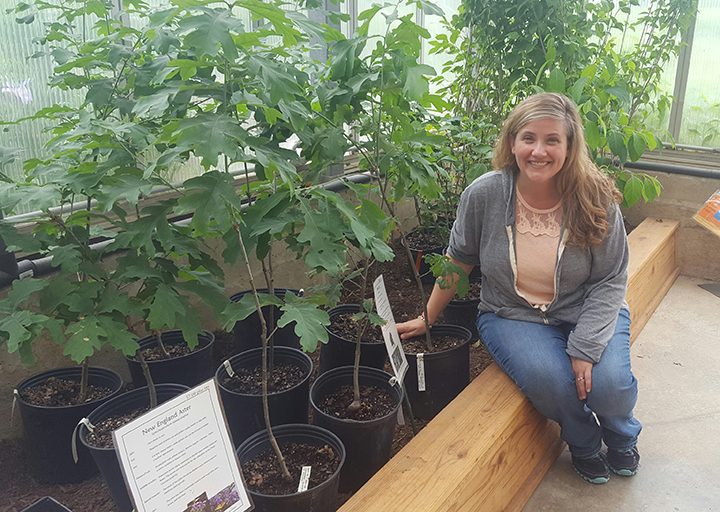 Amanda Smith has cherished childhood memories of chasing butterflies through her backyard and watching fireflies light up the sky.

Now the superintendent of natural resources and education at Cool Creek Park and Nature Center, Smith is worried future generations won’t have such experiences.

Her worries are rooted in plants.

“It’s all because we’re planting the wrong plants,” she said.

Smith said people usually see plants native to Indiana as unwanted weeds and instead, bring plants from other nations to fill their yards. While these plants are pretty, they don’t serve as food sources for insects that need native plants. In effect, replacing native plants with non-native plants throws the ecosystem out of balance, she said.

“It’s a domino effect,” Smith said. “We lose our native plants. We lose our insects. We lose the animals that feed on those insects, and it winds all the way up to the top of the food chain.”

But Cool Creek officials are working to turn the tide against this loss of biodiversity by placing native plants in the hands of homeowners. Since Mother’s Day weekend, they have been selling 10 species of native plants from their greenhouse.

Smith said they chose species that had the highest wildlife benefits. The white oak tree, for example, hosts 190 species of larvae. On the other hand, the white trees common in stores and Indiana yards only host zero to two species.

In fact, white trees, like many other now-common plants, are also invasive and have taken over Indiana forests and decimated plant, insect and animal populations. And this is all because people don’t see their own yards as habitats, she said.

“Property-owners need to understand that what we put in our yards impacts more than just our yards,” Smith said. “It impacts every living thing around us.”

Indiana’s monarch butterflies only eat milkweed, Smith said. But people see the plant as a weed, which has resulted in its decline. As a result, monarchs have also declined by 90 percent in 20 years.

Since globalization began, Smith said people have become fascinated by exotic-looking plants and brought them over as status symbols.

“But some things are more important than status and beauty,” she said. “One of those things is our environment and every living thing that calls it home.”

As a result, Smith said people need to start seeing native plants and so-called weeds as beautiful and to start applying the “go local” movement to yards and gardens.

Another characteristic of Cool Creek’s native plants is that they are pesticide-free. Smith said plants treated with pesticides kill what eats it and does nothing for insects or animals.

Instead of freaking out and buying pesticides when finding holes from insects in plants, Smith said people should be excited by the blossoming habitats in their backyards.

“We need to stop that knee-jerk reaction,” she said. “Those little holes are often a good thing. It means your plants are contributing to the life in our ecosystem.”

Smith said native plants increase Indiana’s carrying capacity for life. They are also easier to care for because they’ve evolved in Indiana’s environment.

“By planting one native plant, you’re bringing a sterile landscape back to life,” she said. “You’re helping save the plants and animals you share a habitat with.”