While Jack Ducat is no stranger to the spotlight and stage at Beef & Boards Dinner Theatre, “Shrek, The Musical” is his first mainstage production there. 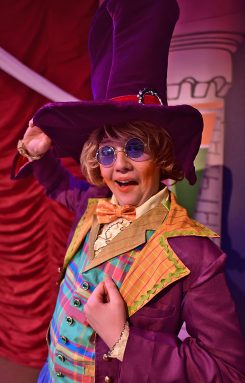 Jack Ducat will perform as the Mad Hatter in “Shrek, The Musical.” (Submitted photo)

Jack was previously seen at Beef & Boards as Peter Cratchit and Boy Scrooge in the one-hour holiday production of “A Christmas Carol.” Now he’s performing as the storybook character the Mad Hatter in “Shrek, The Musical.”

“I have always loved to watch the movie and when I heard about the musical I wanted to take part in it,” he said of the current show.

An eighth-grader at Creekside Middle School, Ducat has also performed in school as well as in shows at Theatre on the Square, BOBDIREX, Grace Church, and CYT.

“I love that so many different people come together to tell an amazing story and portray it in an amazing way,” he remarked about his love for the stage. But, he admitted, it’s difficult “figuring out how to put all the pieces together – putting singing and dancing together, adding a set and costumes, running all of the scenes in order, adding mics and much more.”

“My favorite thing about Shrek is the fairy tale characters,” he added. “I love how the show takes so many stories and brings them together and gives the characters all something to relate to.”

Ducat, 14, aspires to be a Broadway actor.

When he’s not on stage, he enjoys singing, dancing, watching Netflix and being with his family and friends.

He is the son of Lynn and Bill Ducat of Carmel.