Update:​ On June 20, Aspen Creek Grill of Noblesville was added to the lineup for Tenderloin Tuesdays. The restaurant will be  offering a tenderloin and side for $9.99.

Indiana is famous for its pork tenderloins. 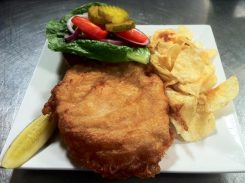 The tenderloin at Woody’s Library Restaurant in Carmel. (Submitted photo)

Hamilton County decided to emphasize that success with Tenderloin Tuesdays.

“Tenderloin Tuesdays started eight years ago when local restaurants indicated Tuesdays in July as their slow period,” said Whitney Riggs, communications coordinator from Hamilton County Tourism. “The tenderloin was not only something the restaurants had in common, but something that is unique to our state. There’s always a great debate on social media about who has the best tenderloin in Hamilton County. People are very passionate about it.”

From June 27 to July 25, restaurants are offering discounts on their tenderloins. Riggs said it is typically $1 to $2 off while some offer buy one, get second one for 50 percent off. Others offer free dessert on beverage with a tenderloin purchase.

Riggs said Hamilton County Tourism has formed a partnership with Vardagan, a Fishers T-shirt store, to create a custom-designed shirt for restaurants to buy, sell or use during the promotion.

HCT is partnering with Q95 (WFBQ radio station) for a second time and will host a lunch onsite at Dooley O’Toole’s in Carmel on July 11. Dooley’s and HCT will give away 95 tenderloin sandwiches. It is limited to the first 95 people with one voucher per guest, Riggs said.

The Tenderloin Trail includes almost double the amount of restaurants as Tenderloin Tuesdays. However, not all the restaurants on the Trail offer deals and participate in the Tuesday discounts. 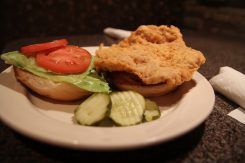