You are at:Home»Current in Zionsville»Zionsville family fundraising to purchase dog to detect low blood sugar

Vivian Knueppel’s blood sugar drops so low that seizures are a real possibility. 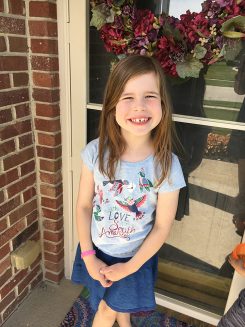 Vivian Knueppel is awaiting a dog that can detect low blood sugar and help her avoid seizures. (Submitted photo)

Enter a yellow Labrador named Indy to the rescue for Vivian, a Zionsville 6 1/2-year-old who was diagnosed with Type 1 diabetes 2 1/2 years ago.

“(Vivian) doesn’t know when it’s low. She says she’s fine,” Knueppel said. “We decided she needed this dog to help her be more aware when the technology is not.”

Vivian is eager to get her dog next month.

“He gets to come everywhere I go, even in the school,” said Vivian, who will be a Pleasant View Elementary first-grader in the fall. “I’m just excited to get him.”

Her alert dog was already named Indy. He is being trained at River’s Edge Dog Academy in Texas.

“We thought that was perfect coincidence for the girl from Indy,” Knueppel said.

Indy has been working with the trainer to get socialized.

“The most important thing for us is that he will be able to handle the school environment,” Knueppel said.

Knueppel said to train the dogs they collect saliva from people with Type 1 diabetes.

“They hide the sample and the dog alerts to it. That’s how they train them to smell the low (blood sugar),” Knueppel said. “The dog will catch a low 15 to 20 minutes before a blood glucose monitor and a pump.”

Vivian has two brothers, Wesley, nearly 5, who has Down syndrome, and Louis, 3, who was adopted from China 1 1/2 years ago.

Through June 6, the Go Fund Me campaign has raised $6,248 of the $8,500 needed for the dog. There will be a garage sale in their Rock Bridge neighborhood June 16 to 17 to raise additional funds.

“It’s been overwhelming to see the support this has generated,” Knueppel said. “Her story has touched people’s hearts, and we’re thankful for that. The dogs cost $10,000 because they have to be trained for at least a year, 24/7. They are trained to alert when she is sleeping.”

Knueppel and her husband, Daniel, will continue to train the dog and communicate with River’s Edge trainers. A dog is trained for two years and costs $25,000.