You are at:Home»Current in Carmel»Carmel Community»Carmel water tower gets a paint job to match Midtown

Along the Monon Trail north of City Center Drive, one of Carmel’s most prominent water towers recently received a face lift. 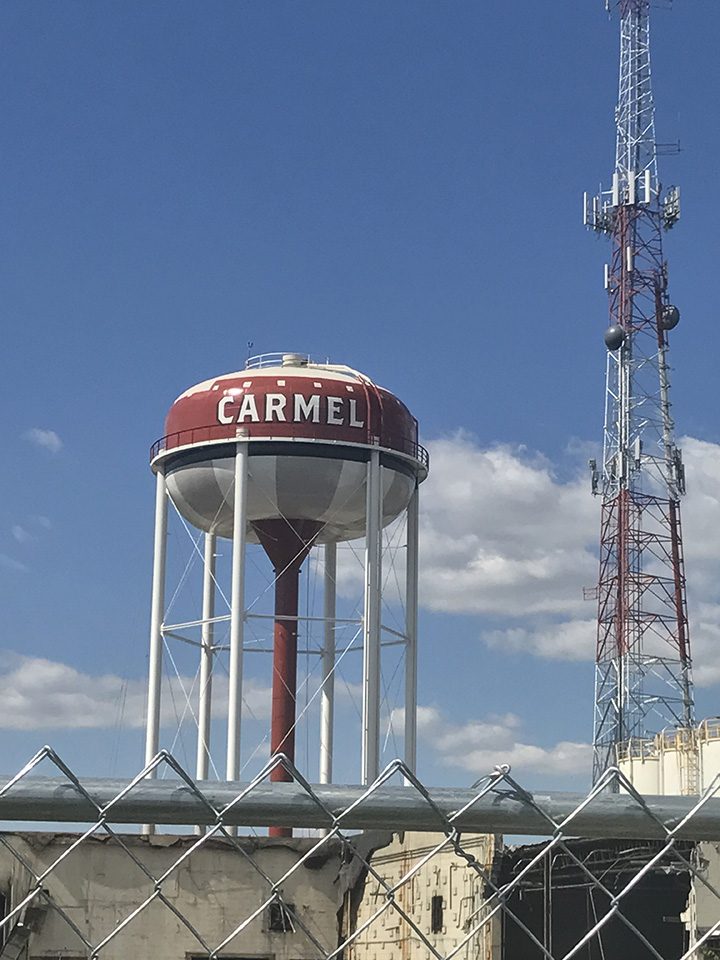 A water tower in the Midtown area recently got a new paint job. (Photo by Adam Aasen)

The tower, located near where the historic grain elevator used to be, has been repainted red and white to match anticipated buildings in the surrounding Midtown area. More than $150 million of mixed-use development with office, retail and residential spaces will be built on both sides of a soon-to-be widened Monon Greenway. Much of the new development is led by Justin Moffett’s Old Town Design Group.

The City of Carmel spent $620,000 to repaint the tower, with the low bidder being Classic Protective Coatings. Although some Carmel residents said they wanted blue and gold to match Carmel High School, Carmel Mayor Jim Brainard said the idea was to complement Midtown’s grittier industrial color palate. The painting was finished during the week of June 5.

“It needed to be repainted,” Brainard said. “Certain parts of the steel needed to be replaced. It’s an older water tower. We decided to get colors that reflect the Midtown redevelopment buildings, so we used the Wilkinson Brothers to get some options for graphics, and we bid the painting of it and it looks like it’s finished now. It’s a complicated process. You have to use that covering when they paint it so it can dry. And you have to be careful, because that covering operates like a big sail, and these water towers have been known to blow over if it gets really windy.”

Brainard said the water tower is at least 30 years old and is in one of the city’s most prominent locations. Many towns and cities use water towers as giant billboards to advertise the city, so Brainard said it’s important they looks nice. Carmel has several water towers throughout the city, including at 146th Street near Westfield, 136th and Shelborne Road, 106th and Gray Road and three others at ground level.

“I always ask the third-graders every year why we put water in the towers,” he said. “We always get one kid, who will probably go to Purdue and be an engineer, who says, ‘It’s so you can get pressure so water can go uphill in your house in the bathroom.’”