You are at:Home»Current in Carmel»Carmel Community»Carmel High School grad racks up honors at Ball State University

Alex Bourdeau went to not being aware there was a student employee award to winning four of them. 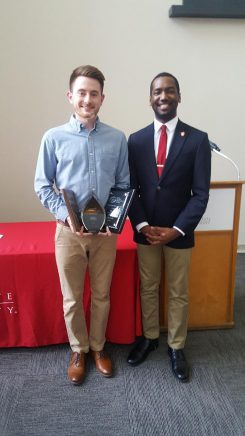 Bourdeau, a 2013 Carmel High School graduate, was recently named Ball State University’s Student Employee of the Year. At the same time, he learned he won student employee for the state and midwest region and nationally.

Bourdeau, who worked at Ball State’s iStudio for the Dept. of Educational Psychology, had never heard of the honor until he learned he was nominated by his boss, Dr. Jerrell Cassady, for the Ball State honor.

“When I heard the description of working with two Smithsonian museums (at the ceremony), I knew I had won,” Bourdeau said. “I didn’t know I was going to go on to win state, regional and national awards.”

Bourdeau learned he won all four awards at once.

“I went to go sit down after the first award and they told me to stay up there,” he said. “I guess I’m the first person ever to win all four awards. At least, that’s what I was told.”

“My job tasks were data input and data analysis,” Bourdeau said. “A large part of my job is the program evaluation for two Smithsonian museums, the National Museum of the American Indian and the National Air and Space Museum. We create surveys and sent them out to the museum to have (visitors) take after going to the museum.”

Bourdeau said they analyze the numbers and inform the museum on possible improvements or what to keep the same.

Bourdeau, who graduated in May with a degree in psychology, plans to pursue a master’s degree in quantitative psychology at Ball State and is awaiting word on whether he has been accepted. If he is accepted, he would like to return to the iStudio.

““I looked forward to going to work after class,” he said. “So it felt even better to be recognized for something I loved.”

Dr. Cassady told Ball State Magazine, “Alex is a tremendously motivated problem-solver. His dedication to work made him a real asset for us.”