You are at:Home»Current in Carmel»Carmel man hopes to spar his way to the 2020 Olympic karate team

Luke Sartino is a typical college student in many ways. An incoming senior at Marian University, where he’s a member of the mens soccer team, he spends his time free time studying and practicing. 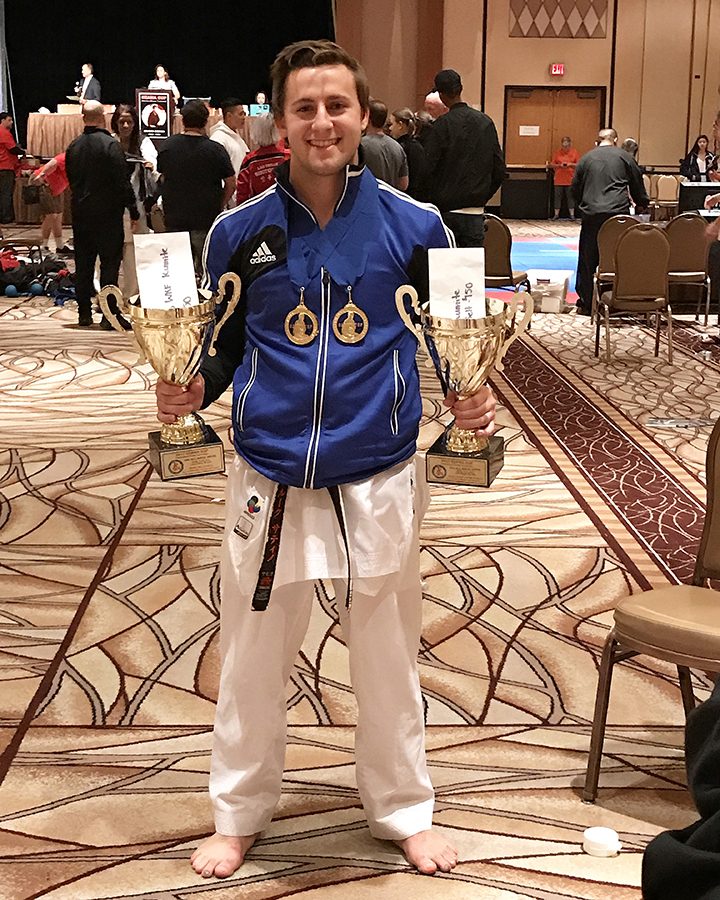 But the 21-year-old is also preparing for another title – Olympic karate contender.

Sartino recently participated in karate competitions in Malta, Spain and Las Vegas in preparation for his ultimate life goal of winning an Olympic gold medal. He won first place in Malta and went undefeated in Las Vegas.

“It’s important to get this experience fighting people from all over the world, because people from different parts of the world fight very differently,” Sartino said.

Unlike many countries, the United States doesn’t fund its karate athletes, Sartino said, so he pays for trips out of his own pocket. And unlike other nation’s athletes who may receive funding to spend their days training, he has to juggle his schedule to build in time for training.

“Being a college student, it’s definitely very hard to leave classes in the middle of the week to compete in Europe and then return and get right back into the swing of things,” Sartino said. “These events won’t qualify me for anything. However, they will help me continue to polish my image and become more well known in the karate world before the Olympics.”

As team captain, Sartino provides teammates with tips and advice to help them in international competition. It’s a role he’s dreamed of since his first international trip when he was 10.

“That can range from knowledge of the rules, how the tournament is organized or how to conduct themselves inside the tournament,” he said. “Occasionally, I also get the chance to assist in running the team training sessions while abroad.”

Sartino loves the discipline of karate, from the tiny details of every punch or kick to the commitment to tirelessly train rep after rep for the perfect technique.

“It takes a positive attitude. No karate athlete wins every match they have. It’s a sport where, on any given day, anyone can win,” he said. “Finally, it takes study. I’m always on YouTube, watching my competitors’ fights so I can gain a greater understanding of techniques they use that work that I can try as well as taking notes on strategies they use.”

It’s all in preparation for qualifications for the 2020 Olympics, which will take place a few months prior to the Summer Games. And competition will be tough. Only 80 athletes in karate, 40 men and 40 women, will make the team.

“Of the 40 males there are four different divisions, which means there will only be 10 athletes in my weight category who will get the spot to compete in the Olympics,” Sartino said. “I definitely picture myself on the medal stand in 2020. If I didn’t picture myself on the medal stand, I would have a hard time keeping myself motivated to train every day.”