You are at:Home»Current in Fishers»Brooks School Elementary students support Sheets from Home 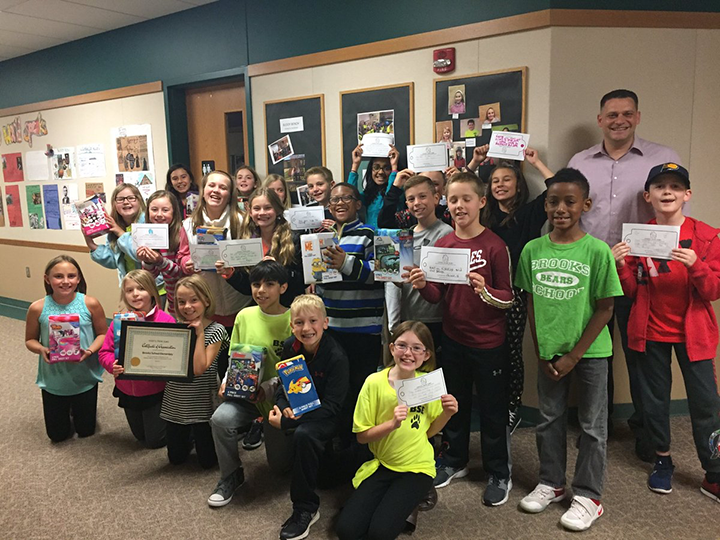 Brooks School Elementary students hold up notes to send to children with the bed sheets along with Sheets From Home co-founder Asaf Halevi. (Submitted photo)

As Brooks School Elementary Student Council sponsor, Jennifer Mulvaney is always looking for charities her students might want to support.

The student council, made up of third- and fourth-grade elected members, is allowed to do two money-making fundraisers per year. Marabeth Pareira, a Brooks School office secretary, is an ambassador for Sheets From Home and told Mulvaney about the nonprofit, which provides sheets to children in the hospital.

Mulvaney shared the information with the student council, and they voted for it over their other ideas.

“Once they knew whom they wanted to support, they brainstormed ideas on how to raise the money and decided to just do a week-long fundraiser, asking families to donate to this worthy cause, with a culminating spirit day, a pajama day, at the end of the week,” Mulvaney said. “Students who brought in at least $1 any time that week could participate in the pajama day. They chose pajamas because it went with sheets.”

Mulvaney said student council members wrote an advertisement for the school newsletter and emails that went out to families. They also made announcements in classrooms and over the intercom at the end of each day.

Ya-el Halevi, of Carmel, started the nonprofit with her husband, Asaf, in 2011 after her son, Tamir, now 10, was diagnosed with neuroblastoma in 2010. He spent several months in different hospitals and is now cancer-free.

“We spent weeks at a time in the hospital. It was our second home,” Halevi said. “Whenever he had to be admitted, we always brought his sheets. That’s where it started because other kids and other families saw it. They said this is cool.”

Halevi said included in the children’s sheets donations are a few words to make it more personal.

“When a kid is feeling crummy in the hospital, it’s always nice to know someone is thinking about you,” she said.

“We try to have a variety so we can cheer them up,” said Halevi, who survived battles with melanoma and cervical cancer.