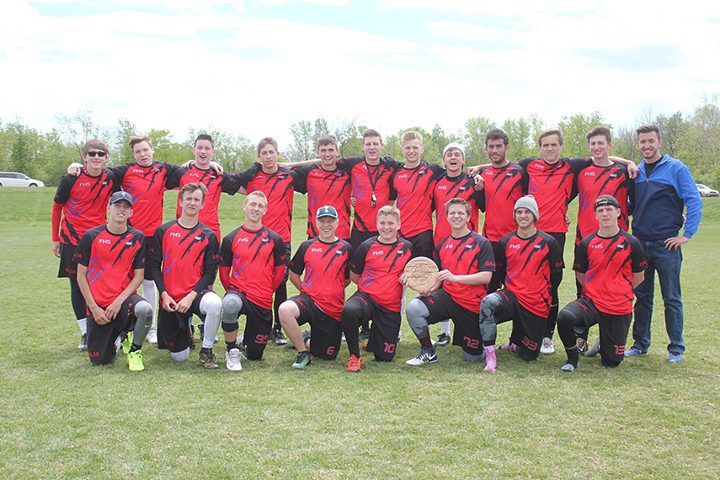 Ultimate Frisbee has grown in popularity in recent years. The game combines the non-stop movement of soccer with the passing skills of football with a Frisbee. Two Fishers students, Robbie Workman and Luke Lawyer, created the Fishers Baja Ultimate Frisbee club team in 2014.

“We now have about 19 players on the team comprised of students from Fishers High School and Hamilton Southeastern High School. Seven play on the field at a time, and depending on the tournament we usually have about 14 or 15 people show up,” said Kevin Schwartz, coach and school sponsor for the team.

The club competed in the NEQUA Knockout Tournament in April. Over the course of the two days the team went into the final match 6-0.

“We ended up moving on to the final match facing Center Grove. At the time, they were ranked fourth in the nation,” Schwartz said. “We ended up losing to them, but we had two Indiana teams competing against each other in one of the biggest national tournaments, which I think was really awesome. It really showed the growth of the sport at the Indiana high school level.”

The team went on to compete in the Indiana State Championship Tournament last month. It again faced Center Grove and lost 8-5.

“It was a really tough match. We made quite a bit of improvement since then,” Schwartz said.

The team played in the June 3-4 National Invite in Loves Park, Ill. The event happened to be the same weekend as graduation for HSE.

“We took a vote as a team. If we were to accept this national invite bid, a lot of the seniors would either miss graduation or miss a large part of the tournament. They voted to miss commencement to play in this very prestigious tournament with 16 of the best teams in the U.S.,” Schwartz said.