You are at:Home»Current in Carmel»Carmel Cover Stories»Honored Hero: Foundation taps Carmel’s Rik Bag to tell his story of living with Crohn’s disease 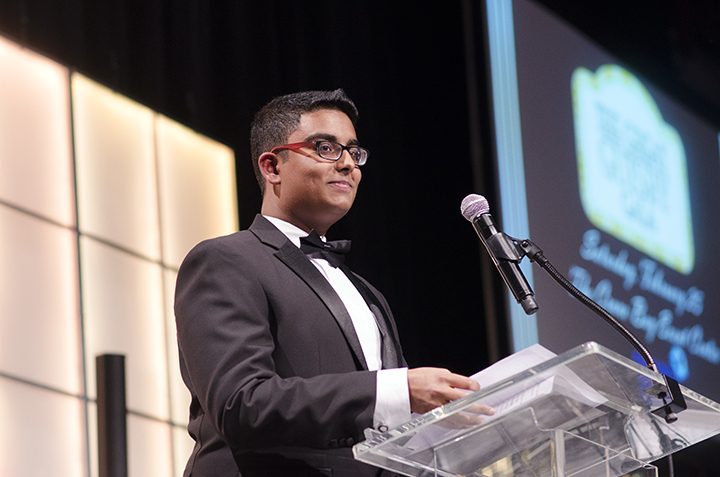 Rik Bag of Carmel speaks at the Great Gutsby Gala, a fundraiser for the Crohn’s and Colitis Foundation. He is serving as a 2017 Honored Hero for the local chapter of the foundation. (Photo by Sara Baldwin)

It’s not something that’s always easy to discuss, but Rik Bag is on a mission to educate the public about what it’s like living with Crohn’s disease and what is being done to find a cure.

Rik, 16, has been named a 2017 Honored Hero of the local chapter of the Crohn’s and Colitis Foundation of America. Throughout the year he is tasked with sharing his story and helping raise funds for the foundation. He will do both at the annual Take Steps for Crohn’s and Colitis fundraiser June 25 at Victory Field.

“You’ll hear a lot of people say that Crohn’s is like an invisible disease. Looking at me it’s hard to tell that I have these problems,” Rik said. “It’s not like you can see a lot of the things that are going on, and in addition to that, gastrointestinal problems aren’t necessarily the easiest to talk about.”

But Brandi Greenleaf, executive director of the Indiana chapter of the Crohn’s and Colitis Foundation, knew Bag was the right person to represent the nonprofit soon after she met him during the 2016 Take Steps campaign.

“I watched Rik work so hard to raise awareness of (irritable bowel disease) and much-needed research dollars from his family and friends,” she said. “Most 15-year-olds do not have the strength or desire to share their story, but Rik was determined to do what he could to ensure he was making a difference for the Crohn’s and Colitis Foundation.” 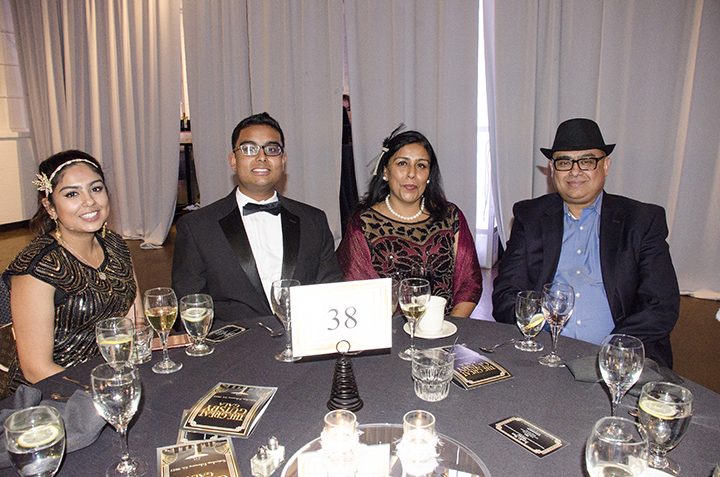 Rik Bag, second from left, with his sister, Roshni, mother, Anushree, and father, Arnab, at the Great Gutsby Gala. (Photo by Sara Baldwin)

Rik, who just finished his sophomore year at Carmel High School, first knew something was wrong as he struggled to make it through tennis camp before his freshman year. As the season began and he still faced frequent fevers, nausea and pain, he went to a doctor who discovered an abcess that required immediate surgery.

It turned out the abcess was caused by Crohn’s disease, a diagnosis his mother, Anushree Bag, found difficult to accept.

“Surprised is an understatement,” Anushree said. “It was complete denial, complete shock. In fact, for a few months I didn’t believe in the diagnosis. I thought they were making a mistake.”

No one else in the family had a history of Crohn’s disease, Anushree said, and she didn’t want to believe her son had an illness that couldn’t be cured. It took more than a year for her to be convinced of the diagnosis, during which time the family went through a great deal of trial and error to figure out how to best manage it.

Crohn’s disease results in chronic inflammation of the gastrointestinal tract, with common symptoms including diarrhea, abdominal cramps and rectal bleeding, although they vary from patient to patient. The Crohn’s and Colitis Foundation estimates that Crohn’s disease may affect as many as 780,000 Americans, most of whom are diagnosed between the ages of 15 and 35.

After the diagnosis, Rik began taking medication and making major changes to his diet to determine what he could still eat without problems and what would cause a flare-up. Managing the disease takes a lot of planning ahead, he said, but he hasn’t let it slow him down.

Despite missing weeks of school, he has a 4.44 GPA, plays tuba in the CHS orchestra and is a member of DECA, the debate team, Carmel Mayor’s Youth Council, Young Entrepreneurs Club, Carmel HOSA and Model UN. And he is still a member of the tennis team, which won the 2016 IHSAA state title.

“Rik was amazing last season,” CHS tennis coach Spencer Fields said. “He really wanted to play well and be a strong part of playing on our state championship team last year, but when his diagnosis and treatments got in the way he changed his focus. He became the spirit/motivational leader of the team. Rik gave his whole heart to the performance of our team, even when he was down and out. I know it meant a lot to his fellow teammates.”

Rik said he’s still learning to manage his disease, and he usually misses one or two days of school every couple of weeks. Friends and teachers have been extremely supportive, he said, even if they don’t fully understand his condition. 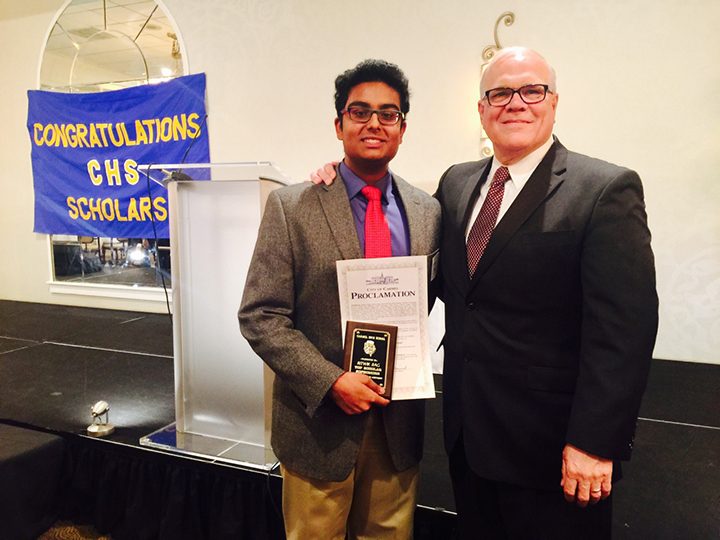 “People at school see me at my best. When I’m at my worst, I’m at home and I’m on a lot of medication. I’m in bed for a lot of the day and I’m in a lot of pain,” he said, adding that he tries to get a lot done when he’s feeling well.

Because of Crohn’s disease, Rik has become an expert at planning ahead, and he’s given a lot of thought to his long-term goals, too. He’s been inspired by the doctors who have treated him in the last two years and strives to become like them one day.

“I hear all of these stories about doctors not doing what they’re supposed to do, but then I see some of my doctors and they were so wonderful for me,” said Rik, whose lifelong goal has been to become a physician. “I want to be just like them. I want to make my patients feel just like I did. I want them to feel safe. I want them to feel like they’re going to feel good the very next day. Now, I have not just one or two but a multitude of images in my head of who I’m going to look forward to being.”

Take Steps for Crohn’s and Colitis gives those facing the conditions and their families the opportunity to connect with and inspire others facing similar struggles. In addition to the walk, the event includes food, kid’s activities, entertainment and music.