You are at:Home»Current in Carmel»Column: Cave 25 and the oldest Bible verses 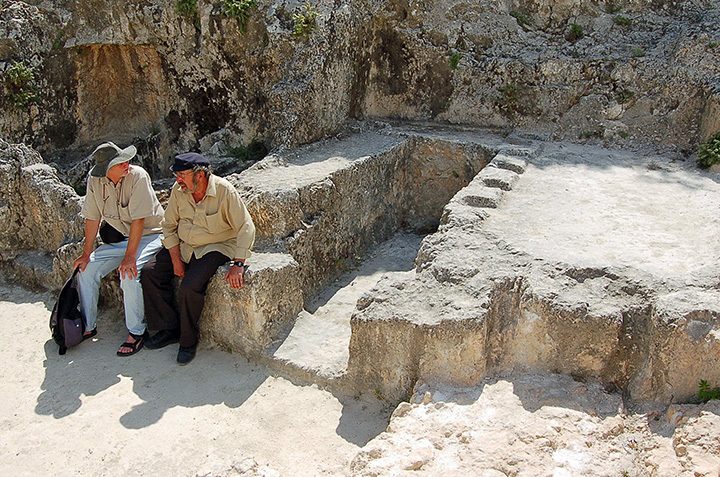 A tomb in Jerusalem provides evidence of ancient Jewish burial practices. It also provided what is thought to be the oldest example of text found in the Bible.

In 1979, Gabriel Barkay, an Israeli archaeologist, had a hunch that residents of Jerusalem might have buried their dead in caves in an area called Ketef Hinnom, located southwest of the Old City near the Scottish Church of St. Andrew. His hunch paid off, and he uncovered a tomb complex he dated to the seventh century B.C. One tomb included a stone bench, once inside a cave, containing headrests for six bodies. Under the bench Barkay found a chamber, carved in the rock, where bones and grave gifts were deposited after the body had lain on the bench for 12 months. When Barkay looked inside the chamber, he concluded that its contents had been looted long ago. But to keep an annoying 13-year old volunteer on the site occupied, Barkay sent him into the chamber with a hammer. The young volunteer discovered what turned out to be more than two feet of accumulated bones and more than 1,000 items.

One of the items in what became known as Cave 25 was a tightly rolled sheet of nearly pure silver. When eventually unrolled, the sheet, about 4-inches long by 1-inch wide, was found to be inscribed with ancient Hebrew script spelling out the so-called “Priestly Benediction” recited in Numbers 6:24-26.  Another smaller rolled silver sheet contained the same text. Experts have confirmed that these writings were made before 587 B.C., when Jerusalem was conquered by the Babylonians, making them at least 400 years older than the Dead Sea Scrolls, the second-oldest examples of Biblical writings.  The silver scrolls, thought to have been used as amulets, are now in Jerusalem’s Israel Museum.