Joel McHale embraces the image of being one of the hardest workingmen in show business. 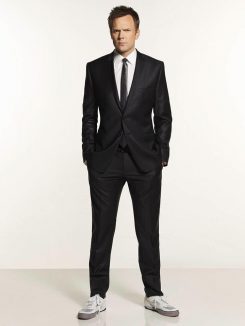 Art: Former host of “The Soup” on E! Joel McHale will bring his stand-up comedy act to the Palladium June 29. (Submitted photo)

For several years McHale juggled being the host of “The Soup” on E! network as well as playing Jeff Winger on “Community.”

So after filming the first and only season of “The Great Indoors” in March, McHale didn’t take much time off before beginning a stand-up comedy tour.

“I’m a workaholic,” said McHale, whose CBS show was canceled in May. “I like working. I like performing. So, I always thought as a kid being an actor and getting to perform is such a bonus that I never wanted to stop doing it.  I love being on stage and I think it keeps me relatively young. Well, it keeps me in my mid-40s where I am. I’m in a constant state of desperation.”

McHale will appear at 7:30 p.m. June 29 at the Palladium in Carmel in the midst of a summer-long tour.

McHale said his stand-up routine helps him prepare for jobs like hosting the People’s Choice Awards, which he did earlier this year.

“It definitely keeps me on my toes,” McHale said “It’s like going to a proverbial boxing gym every day. Getting to perform is a pleasure. It keeps me fresh and keeps me in shape so I can be ready when hosting stuff comes up. I have a ball doing it.”

“I don’t think I’m playing any aquariums, that’s the only venue I’m not playing,” he said.

“Community” had a five-year run on NBC and one year streaming on Yahoo! Screen. “Community” was always on the brink of being canceled on NBC before it finally was in 2014, but had a loyal following and was picked up for one year by Yahoo!

“I always said we had a small audience but they were by far the best looking and most intelligent audience in the world,” McHale said. “Even now, I get more people coming up and saying really nice things about the show. I think (creator) Dan Harmon’s vision and writing was so unique that it definitely spoke to a lot of people. I count that as a triumph in my career.

I think if the show had started on streaming and not on a network, it might still be on. We were always on the bubble (of being renewed) every moment. We would go to Comic Con and we fill up the largest hall and they turn away five thousand people. I was like ‘Oh, people are watching the show. This is nuts and wonderful.’ Now my kids are watching it.”