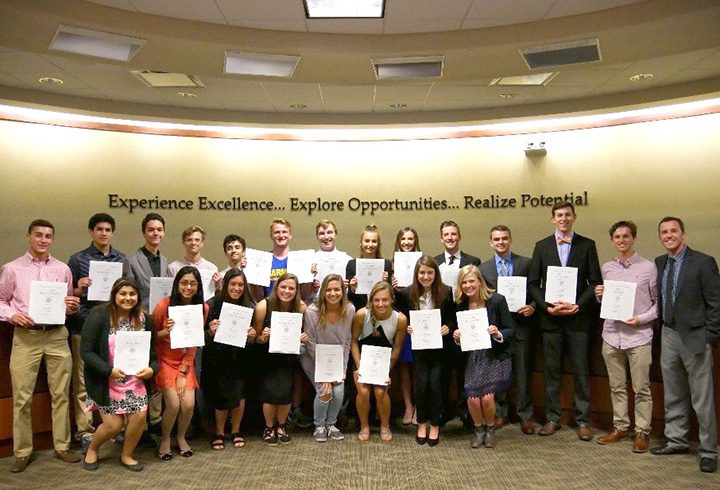 Carmel High School DECA members who placed in the Top 10 in the World are honored at the May 22 CCS school board meeting. (Submitted photo)

It’s been two years of significant victories for Carmel High School DECA students. This year, 27 students finished in the top 10 in the world in their respective categories in a competition in California, with four students named 2017 World Champions.

“Winning at the International Career Development Conference can be transformative for many of our students.  More than anything else, personal success through DECA competition builds their professional confidence, and we hope that carries over into every step of their future careers,” DECA advisor Richard Reid said. “But the success of past students has encouraged current students to work even harder on their DECA projects, because they know victory is attainable.”

An international organization, DECA has more than 225,000 members worldwide. Through competitions at local, state and international levels, DECA gives students an opportunity to present projects and ideas to experts in the fields of marketing, finance, operations and entrepreneurship. The Carmel DECA Club has a membership of 525 students.

“In the most basic terms, DECA brings classroom learning to life through authentic learning experiences,” Reid said. “Rather than memorizing a bunch of industry jargon or talking abstractly about businesses that kids will never see, DECA empowers students to apply what they are learning by working directly with local businesses.”

This year, seniors Kathryn Scott and Jack Segal were crowned world champions in the Creative Marketing Project for their development and implementation of the embRACE campaign, which addresses racial and political tensions in the community.

“It feels amazing to have received such a prestigious award. Kathryn and I put countless hours of work into this project and it still feels unbelievable,” Segal said. “From the beginning of the school year, we made it our goal to get first place in the world. At that time, such a goal seemed like no more than that, a goal that was set way too high to actually be possible. Each year, I have strived to finish better in competition than the previous year, and winning first in the world is the best way to end my time in DECA.”

Scott said she had never worked so much on one project in her life.

“It was great that this could be something that had a positive impact on my community and beyond,” Scott said. “To slowly work my way to being a world champion my senior year was the best way to cap off my career. I was drawn to DECA due to my interest in business, and a senior on the tennis team my freshman year made it to the international conference, and I thought that opportunity was so cool.”

Scott is the most successful Carmel DECA student in its history, Reid said. She qualified for the International Career Development Conference in 2015, 2016 and 2017; placed sixth in the world in the Hospitality & Tourism Operations Research event in 2016; and placed first in the world in the Creative Marketing Project in 2017.

Trevor Davis and Bryce Duncan also placed first in the world for their Independent Business Plan, a 30-page business proposal for a hypothetical business called PowerGo.