You are at:Home»Current in Zionsville»Beatles expert releases encyclopedias, prepares to speak in Zionsville, Westfield 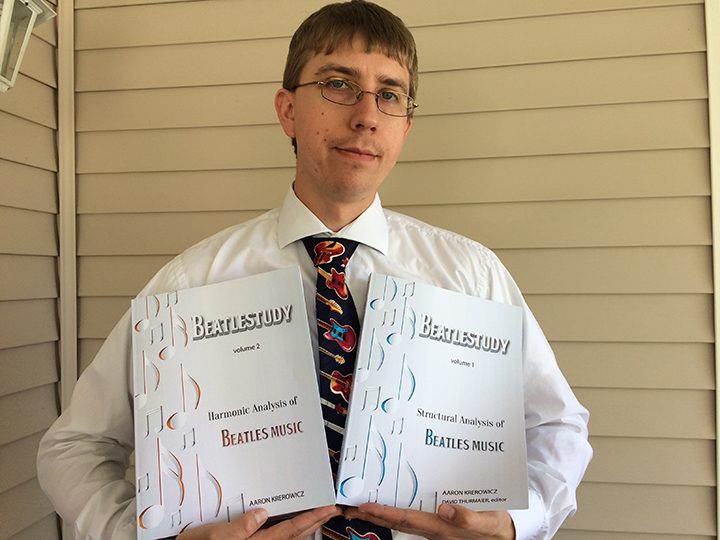 Aaron Krerowicz doesn’t travel “Across the Universe,” but he does go around North America to give presentations about The Beatles.

“I had nine tours last year and have 10 tours this year,” said Krerowicz, who lectures at various stops on each tour.

The Carmel resident has two presentations planned near home this month.

Krerowicz will present “The Beatles: Band of the Sixties” at 6:30 p.m. June 13 at Westfield Washington Public Library, 333 W Hoover St., Westfield. The hour-long multimedia presentation will include audio clips and excerpts from band member interviews.

On June 20, Krerowicz will present “From the Shadow of JFK: The Rise of Beatlemania in America” at 6:30 p.m. June 20 at the Hussey-Mayfield Memorial Public Library, 250 N 5th St., Zionsville. Krerowicz said the hour-long presentation explains The Beatles’ popularity rise in the U.S. in early 1964, not long after President John Kennedy was assassinated Nov. 22, 1963.

Krerowicz, 31, also has recently published two encyclopedias, one each on the structural and harmonic analysis of the legendary British group.

“These are encyclopedias of analysis to explore why this band’s music is so great,” he said.

In June 2015, Krerowicz quit his other musical pursuits to concentrate on writing books and giving presentations on The Beatles.

“If I came home from work and spent an hour a day, it would take me 20 years to write these books,” he said. “The idea to make this a full-time career is to put all my creative energies into analysis and lecture tours.”

Krerowicz said for most of his presentations he is given an honorarium to speak at free events.

“I supplement that with book sales (at the events),” said Krerowicz, who came from Kenosha, Wis., to attend Butler University as an undergraduate from 2004 to 2008.

He moved back to Carmel in 2015 after living in New England for seven years.

Krerowicz’s books also are available on Amazon.com. Krerowicz received a research grant from the University of Hartford in 2011 to publish his first book, “The Beatles & the Avant-Garde,” which came out in 2014. He wrote three more and then the two-volume encyclopedias.