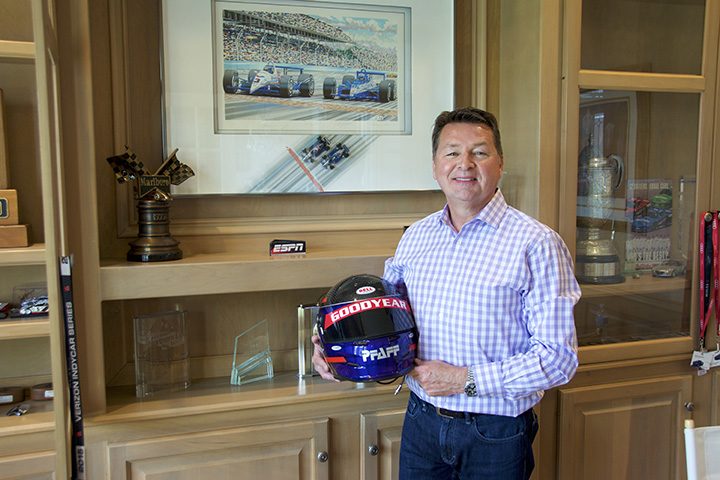 Carmel resident and former IndyCar driver Scott Goodyear displays a helmet in front of a photo that shows his second place Indy 500 finish in 1992, the closest in history. (Photo by Lisa Price)

As Scott Goodyear’s IndyCar career progressed, he found himself spending more and more time in Indianapolis.

“Back then we had as many as 22 races, and there were no testing limits,” he said.

His wife, Leslie, suggested they move from Boca Raton, Fla., to the Indianapolis area because of all the time her husband had to spend here.

“She said, ‘We need to be where you are going to be. This is crazy.’ And it was,” Goodyear said.

They moved to Carmel in 1994, and it quickly became home. After he retired and became a color analyst for ABC/ESPN, he said neighbors and others would ask all the time if he was going to return to his native Toronto or move somewhere warm. His answer was always the same. 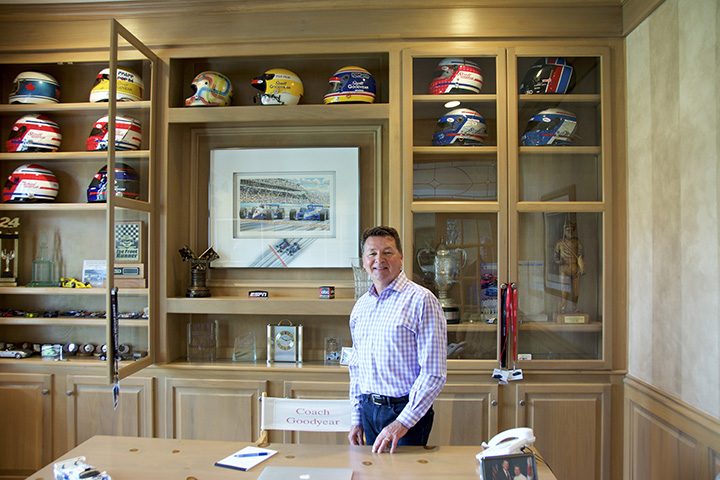 Scott Goodyear pauses in front of racing memorabilia in his Carmel home. (Photo by Lisa Price)

“We love it here,” Goodyear said. “We love the people. We love the schools. It’s great for kids.”

Their oldest son, Chris, 25, graduated from Brebeuf Jesuit Preparatory School. The other two children graduated from Carmel High School, Michael in 2014, and Hayley in 2015. All three children played hockey at one time, and Goodyear even served as coach.

These days, Goodyear, 57, splits his time between the broadcast booth, public speaking and serving as an Audi driving instructor.

He enjoys the process of preparing for races and analyzing them.

“When you go live on television, it’s like taking the green flag,” Goodyear said. “When we go to commercial, it’s like the yellow flag. You talk to the production truck. So I still get excited.”

The adrenaline runs especially high at the Indianapolis 500, where Goodyear took part in one of the most memorable moments in race history in 1992.

Goodyear nearly became the only driver to go from worst to first. Starting 33rd, Goodyear placed second in the closest finish in the race’s history, losing by 0.43 of a second to Al Unser, Jr.

“It was only the 12th oval race of my life, and Al Unser Jr. grew up on oval tracks,” Goodyear said. “As much as I was devastated when I got out of the car, I realized I didn’t have the experience to know what I was doing when I was driving that car at 225 mph those last few laps.”

Goodyear said he is often asked if he gets tired of hearing about that race. 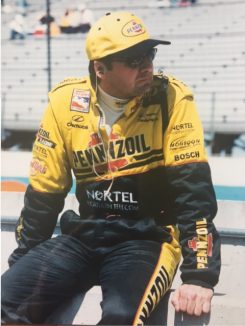 Scott Goodyear sits on a wall at the Indianapolis Motor Speedway in 1999 waiting for practice to begin. (Submitted photo)

Goodyear was leading the 500 in 1995 on lap 190 when he got penalized for passing the pace car before the green light on a restart. Rather than accepting a stop-and-go penalty, Goodyear stayed on the course and finished ahead of winner Jacques Villeneuve. Race officials put him in 14th place.

In 1997, Goodyear finished second once again, this time to teammate Arie Luyendyk.

“I could feel nothing from the waist down again,” Goodyear said. “I knew right there that it was bad. I didn’t want to say I was retiring, because I didn’t want to be one of those people who changed their mind later.”

When he recuperated four months later, Goodyear continued to drive for Porsche in their prototype sports car, yet he expected his IndyCar career was done.

“If you are not 110 percent committed to what you are doing, to eat, breathe and sleep the racing, then you shouldn’t be doing it,” Goodyear said.

His last sports car race was at Watkins Glen with David Donahue, the late Mark Donahue’s son. They won the Six Hours of The Glen in 2003. 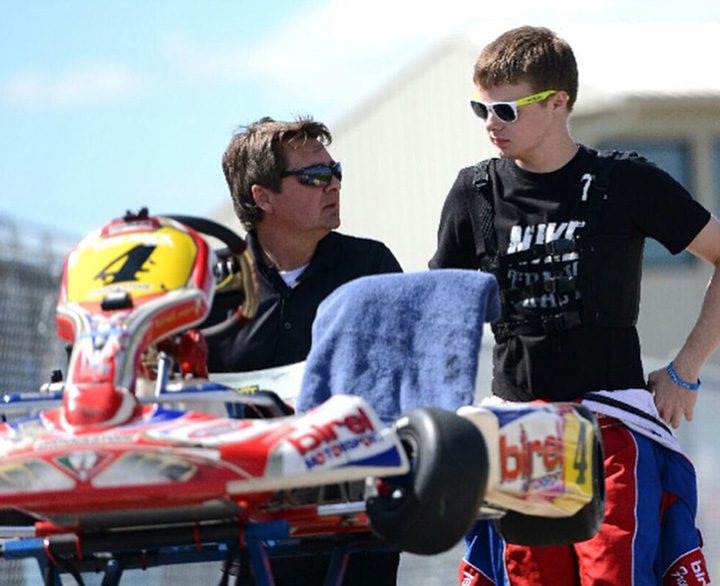 Scott Goodyear visits with his son, Michael, who hopes to race in the Indy 500 one day. (Submitted
photo)

However, Michael did catch the racing bug with go karts when he was around 11 ½ years old. By 12, he was racing competitively and winning.

“I was nervous for the few races until I could see he was fully vested in it,” Goodyear said. “I wanted him to be safe. Then I got to the point where I could see he understood the traffic. He didn’t have to look around. He felt where the cars were. Then (former IndyCar driver) Mark Dismore, who owns the track, told me, ‘He’s very gifted.’ Now I feel better that he’s in a car than a kart.’’

“He’s going to be testing a BMW touring car,” said Goodyear, who used to drive for Chris Pfaff.

Michael, who will be a senior this fall at Ball State, wants to try different forms of racing.

“My main goal is to be like my dad and race in the Indianapolis 500,” Michael said. “I was born here. I absolutely love the race. Every time I walk in the Speedway, doesn’t matter if it’s May or some other month like September or October, I get goosebumps. It’s a place that means so much to me and, obviously, to my family.”