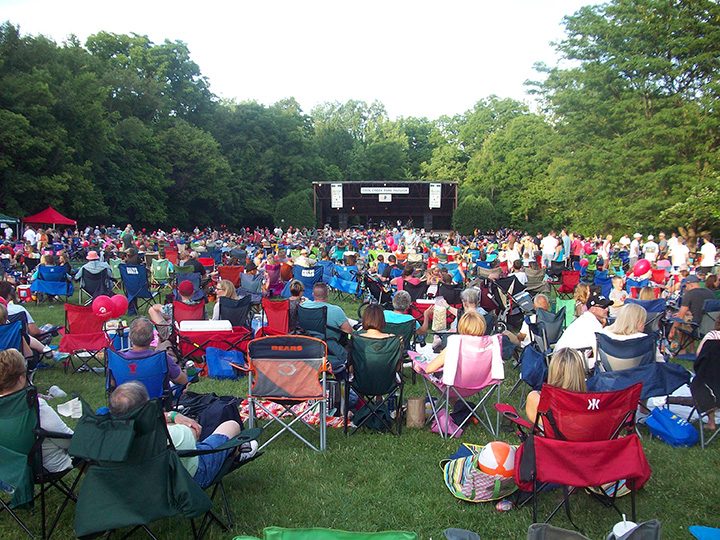 The crowd listens as My Yellow Rickshaw plays July 15, the final concert of the 2016 season. (Submitted photo)

The Cool Creek Concert Series has become a family-friendly tradition in Hamilton County.

“It’s gratifying to have generations coming up telling the staff they came with parents as a teen and now they are bringing their own families,” said Don Nicholls, resource development specialist for Hamilton County Parks.

The 23rd annual concert series will start off with Lemon Wheel June 9 at Cool Creek Park in Carmel. The five-concert series are Friday nights, starting at 7 p.m.

“We’re real sensitive in the matter of effort and time we put into it,” Nicholls said. “First and foremost, we want to make sure they are family appropriate entertainment. Second, we do our research and make sure who has a fairly loyal fan base and take it into account if they have played our venue before. If they were successful and had a lot of favorable comments, we tend to book them. Most of these are bands are and very engaging with the audience.”

Nicholls said another thing that makes this series different is the venue.

“You’re in Cool Creek Park, one of most scenic parks in Hamilton County,” Nicholls said.

There is also a full-scale playground, face painting and Koteewi Range’s inflatable archery arcade on site during shows. The title sponsor is Clay Township Trustee Office and Board. The gates are open at 6 p.m. Nicholls said the performance time has been extended 15 minutes to 9:15 p.m. this summer.

Mixtape is the only band performing that hasn’t been part of the series before.

“They are an up-and-coming ‘90s cover band, fronted by a husband-and-wife team that possess not only outstanding musical skills, but have a great banter and chemistry on stage, that thoroughly entertain fans,” Nicholls said.

Nicholls said the volunteers are always welcome for the Concert Series. Anyone interested should call the Parks Office 317-770-4400.