Bill Estes figures he has found a perfect home for his newest Bill Estes Automotive dealership. 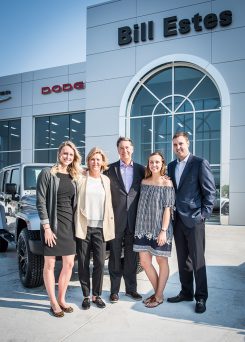 “We bought the franchise that was in Lebanon (in May 2015),” said Estes, a long-time Carmel resident. “Chrysler dictated that we move from Lebanon closer to the Indianapolis area. Having a Ford dealership in Brownsburg for several years, we knew the market. It was a pretty easy decision to move it to Brownsburg, and we were fortunate enough to have the property right on the corner of Northfield Drive and 56th Street.”

“The residential development is tremendous there,” Estes said. “We’re pleased to be in the right location.”

It is not far from his Bill Estes Ford in Brownsburg. There also is a Bill Estes Chevrolet Buick GMC dealership in Lebanon

Estes started with the Chevrolet dealership at 4105 W. 96th St. in Indianapolis.

Estes, who played baseball at the University of North Carolina from 1966 to 68, has lived in Carmel for nearly 40 years. Three of his children are Brebeuf Preparatory School graduates and Division I athletes.

Zak played basketball at the University of Richmond (Va.) from 2008 to 2012. Cali played volleyball at Elon University in N.C. from 2010 to 2013. McKena will be a junior volleyball player at Xavier in the fall.

Zak, who began working in the family business three years ago, is the vice president of Bill Estes Automotive. Cali is working in events and social media for the company.

“It’s a thrill,” Estes said of having two children working in the family business. “I didn’t know if Zak would come back to work. He was working in the internet world after graduating. He said to me, ‘Do you think I’d be successful?’ I said, ‘The only way to know is give it a try.’ He really enjoys it. It’s really special to have my kids involved and continue the brand.”