Sophie Miller enjoys the spunkiness she gets to portray in “Tarzan.”

Miller, who will be a senior at Carmel High School in August, is playing Jane in Christian Youth Theater’s musical production of “Tarzan” June 9 through 11 at Westfield High School. 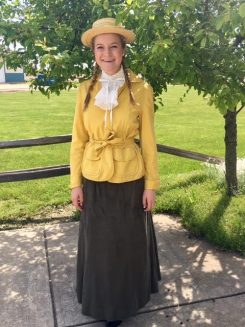 “I love all the characters in Disney and Disney in general, but I love the character because she loves the animals, and I kind of relate to her, in a way,” Miller said. “She sees differences and accepts them. The (female) characters in older Disney characters were more prim and proper. Jane is more of a go-getter. She is an adventurous girl, and she’s not necessarily afraid of going something against the norm.”

Miller began listening to the soundtrack when she heard CYT was presenting “Tarzan.”

“I fell in love with the score, and it was really cool,” Miller said.

This is Miller’s first lead role with CYT. She performed in a CYT production in fifth grade, in the musical “Seussical.”

“I stopped for awhile to do some musical theater in middle school and high school,” she said. “I wanted to try to do a summer show and get back involved in CTY because it’s a great program.”

In the summer of 2016, Miller served as a CYT camp counselor and will return in that position this summer.

Miller, who appeared in the ensemble of “The Phantom of the Opera” May 11-13, juggled preparing for both musicals for several weeks.

“Over spring break, I took my lines and learned them,” said Miller, a member of Ambassadors, the CHS mixed show choir. “I’ve been working on my blocking (positioning on stage for effect), too.”

Miller said she is deciding between elementary education and musical theater as her major when she goes to college.

Linnea Leatherman serves as the director.