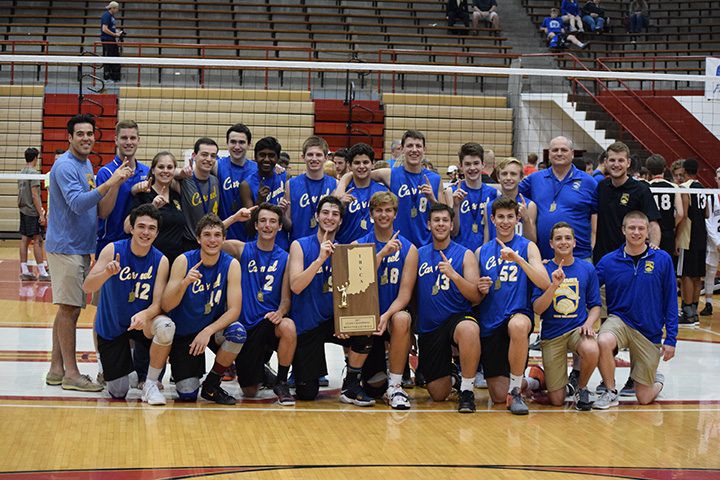 During Jon Harmon’s first year as the Carmel High School boys volleyball coach 10 years ago, five students showed up to try out. Today, his team of 15 students is the state champion.

The team won the first three sets of the state title match to beat Noblesville May 20. The state win was the team’s third in 10 years and first since 2012.

Varsity player and senior Joel Kellum said the team was excited to bring the state title back to CHS and their coach, who will retire after this season.

“It all led up to this—our senior year,” Kellum said. “We thought we deserved it. We put in a lot of work, and I think we proved it.”

At the beginning of the title match, varsity player and senior Jason Schug was nervous, but his confidence grew as the game went on.

Because the team had beaten Noblesville two weeks before, Schug said his teammates felt prepared. This confidence allowed the team to pass the ball smoothly and click in a way that they never had before.

Kellum said they owe this success to the half hour of passing exercises at the beginning of every practice.

“You see all the spiking and blocking and serving, but it’s really passing that’s key,” Kellum said. “Passing is what kept us in the game and separated us from the other teams.”

Another key to building a state championship team is communication, Schug said. He said his team meshes well together because they’re close on and off the court.

The one thing that Harmon said sets this team apart, even from his 2011 and 2012 state championship teams, is the love they have for another.

“I’ve never coached a group of kids that was as close and had as much care and concern for each other,” he said. “It really doesn’t come along very often.”

With seven seniors, the team is also full of veterans, Harmon said, which gave them an edge in experience.

Schug said the number of seniors on the team also served as extra motivation. Because it was the last year for many of them, they were ready to buckle down and put the team first.

“We really had that will to win,” Schug said. “We wanted it. We were ready to fight hard, knowing that it was our last chance.”

Together, the team faced concussions, ankle injuries, nosebleeds and a teammate being carted off on a stretcher during a game. But the players constantly made adjustments and were able to rely on their bench players.

They were also used to overcoming obstacles. Harmon said he often invited skilled alumni players to practice against the team. He stacked the deck against his players during practices by having them deal with point deficits and unfair rulings.

As a result, Harmon said the team was able to play against tough opponents and overcome large setbacks.

“Our players learned to play through adversity,” Harmon said.

Now, Schug said leaving the team behind feels surreal. Going home after school instead of heading to practice with his teammates also feels strange.

Harmon said he can see another state championship win in the team’s future as long as they stay focused.

“It’s within reach,” he said. “They have the talent and the leadership they need. It’s just a matter of working hard to earn it.”

Joel Kellum first met CHS boys volleyball coach Jon Harmon after a band concert in middle school. Harmon saw Kellum watching a practice and invited him to pass the ball around with the team.

Those moments sparked Kellum’s love for volleyball and led him to Harmon’s team at CHS two years later. Since then, Harmon has become Kellum’s mentor and who he describes as the best volleyball coach in Indiana.

“Our team has been blessed to have him with us,” Kellum said.

But that relationship has now come to an end. Now that the season is over, Harmon is retiring.

“It’s tough,” he said. “It’s so tough to leave these kids, but I think it’s time. I have grandkids I want to spend time with.”

During Harmon’s first year at CHS 10 years ago, assistant coach Stephen Van Hoorde played on his team. Now, Van Hoorde will take Harmon’s place as head coach after he leaves.

Harmon said he expects Van Hoorde to be an even better coach than he could ever be. But if he needs support, Harmon plans on sticking around to help on the administrative side of managing the team.

Kellum said Harmon trained his players both physically and mentally, teaching them that volleyball requires strength that goes beyond just the physical. Kellum said his coach would push them hard during practices but all for their own benefit.

“He’d rather have us hate him during practices because of all the hard work and drills than have us hate him after the state championships for not preparing us well enough,” Kellum said. “But either way, I don’t think any of us could ever hate him for anything.”

“It’s been amazing to see these kids reach their potentials,” Harmon said. “Seeing kids grow as players is the most rewarding part of the job, seeing a kid who couldn’t pass a ball become an absolute monster on the court.”

Above all, Harmon said he wants to thank his players for the memories and the learning experience.

“For every moment that I was able to help teach them something, I think they taught me a thousand things,” he said. “I’ve learned so much from them. I love these kids.”