You are at:Home»Current in Zionsville»Dreaming Big: Second book in Zionsville author’s dinosaur-themed series soon to debut 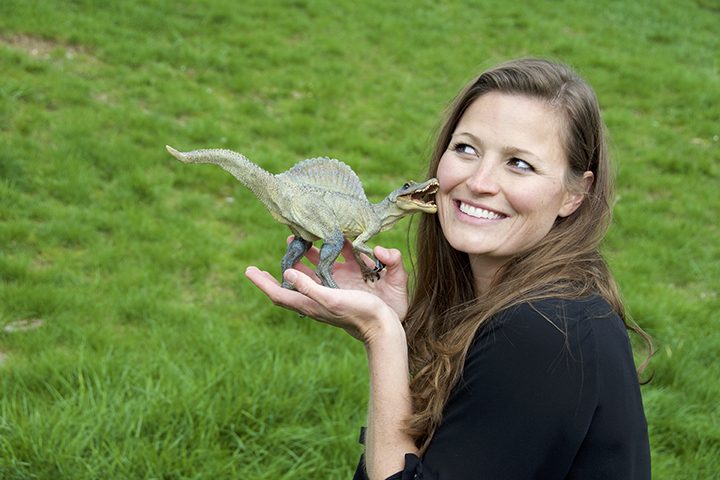 Laura Martin of Zionsville is the author of ‘The Edge of Extinction’ series. The second book, ‘Code Name Flood,’ will be released May 30. (Photo by Lisa Price)

Seeing a dinosaur the size of a dog, and learning that scientists are trying to resurrect dinosaurs, raised several questions. Could people have them as pets? Could they be farm animals? What would that look like on a worldwide scale?

Those questions led to the Zionsville resident’s two-book series, ‘Edge of Extinction,’ beginning with “The Ark Plan,” released last year.

“I had this image of a girl trying to get the mail in a world where dinosaurs are back, and something easy like getting the mail isn’t easy anymore,” Martin said.

Martin said that writing a book has been a long-time ambition.

“Even if you live your entire life working toward a dream that doesn’t happen, it’s a better life spent than (saying), ‘I wish I’d done that,’” she said.

As a language arts teacher in Carmel, Martin taught her kids to chase their dreams, always starting the school year by reading the Langston Hughes poem of that name. While teaching she wrote on the side, gearing her books toward reluctant readers with a focus on middle school boys, whom Martin said want action and adventure but might not be ready for the grit or content that goes along with more mature novels.

“I had all these seventh-grade boys who just didn’t like books,” Martin said. “I said, ‘No, you just haven’t found the right book yet.’”

Martin enjoys focusing on middle school students, which she said is a neglected group.

Martin was on maternity leave with her first child when she learned that ‘Edge of Extinction’ had been accepted for publishing, so she decided to leave teaching and focus on writing.

“I feel like when God hands you have a dream that you’ve wanted your whole life, you put everything you have into it,” she said.

But this wasn’t her first book.

Martin visits classrooms to talk about reading and writing with students, which she compares to being a grandparent.

“I get to come in, have fun, talk to the kids, get everyone riled up and don’t have to grade their essays,” she said.

“Edge of Extinction” was originally a single book, but the publisher felt it was too long and decided to make it a two-part series, with a cliffhanger after the first book. Martin added about 75 percent of the content to the second book to extend it.

The additional research took her characters to Lake Michigan with prehistoric marine reptiles, which technically aren’t dinosaurs but were swimming reptiles.

Martin said dinosaur research is changing constantly as things are still being discovered, adding that she filled gaps in research with her imagination.

The sequel, “Code Name Flood,” will be released May 30 with a day-long event at the Hussey-Mayfield Memorial Public Library. Martin will be at the library for Dino Desserts and a question and answer session from 11 a.m. to 2 p.m. in conjunction with other dinosaur-related activities, including a fossil exhibit, adopt-a-dinosaur activity and a survival challenge with the Zion Nature Center.

Martin recently learned that her third book will be published. She expects it to be released next year. The topic is not dinosaurs, but is based on stories she heard from her father growing up about overcoming differences.

“You get dreams at certain times in your life for a reason,” she said. “I was literally handed this dream I’ve wanted since I was a little girl, at the exact moment when I went from having lots of time to zero time.”

Following dreams is something she encourages students to do during speaking engagements.

“Twenty years are going to go by, anyway, so I might as well spend 20 years doing something that I enjoy, and at the end of 20 years have something to show for it,” she said. 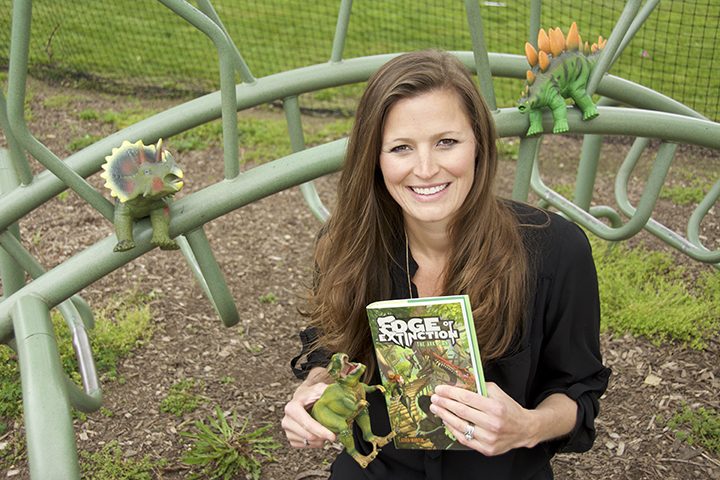 Laura Martin of Zionsville is the author of ‘The Edge of Extinction’ series. The second book, ‘Code Name Flood,’ will be released May 30. The books are available at Black Dog Books, 115 S. Main St., Zionsville. (Photo by Lisa Price)

Favorite vacation spot out of state: the Florida Keys

Hobbies: Running, reading and cooking with her daughter