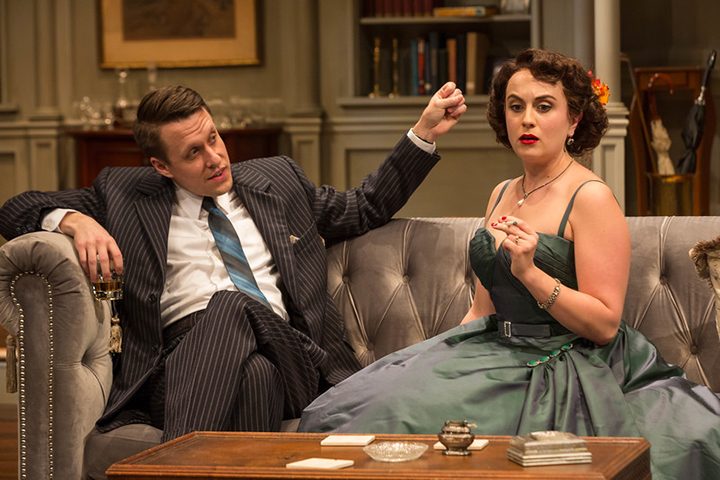 Perfect murders always look good on paper. Detective writers guarantee it by making them unfold the way they want.

But in real life? That’s a different story. Why? Because the perpetrator usually makes “some stupid mistake” and never realizes it until later when everybody is looking at him as the guilty one, American crime fiction writer Max Halliday tells Tony Wendice and his wife Margot in an early scene from the Indiana Repertory Theatre’s “Dial M for Murder.”

By the end of the brilliantly-played stage adaptation of the Alfred Hitchcock film from 1954, everyone is looking at Tony, caught in the “stupid mistake” to which Max was referring.

“Dial M for Murder,” which continues on the Main Stage through May 21, is a stirring tale of a planned murder gone wrong. Tony, played remarkably by Matt Mueller, spent a year planning the perfect murder of his wealthy wife. But when Margot (Sarah Ruggles) ends up murdering – in self-defense – the man who was supposed to strangle her, Tony is left scrambling to cover it up.

Set in a Hollywood-esque, 1952 London apartment, Tony, a retired English professional tennis player, is married to wealthy socialite Margot, who has had an affair with Max (Christopher Allen). When Tony secretly discovers the affair, he decides to murder Margot, both for revenge and her money. When the would-be killer tries to strangle Margot from behind, she finds a pair of scissors on a desk and stabs and kills him.

While Margot’s description of the incident fails to satisfy Chief Inspector Hubbard, he arrests her after concluding that she had killed the man for blackmailing her (an incriminating letter of her affair was found on the his dead body, thanks to Tony). Margot is found guilty and sentenced to death. Hubbard’s persistence on the case, however, reveals a different story, and Tony is found to be the bad guy.

“Dial M” isn’t a typical mystery in that the audience is on the murder plan from the start. The question is not “whodunit?” but will he get away with it? Witnessing the attempted murder, the audience is drawn into the play as also an accomplice.

Making his IRT debut, the boisterous Mueller does his best to make the audience squirm with Tony as he attempts to stay one step ahead of the chief inspector, played entertainingly by 17-year IRT veteran Robert O’Neal. For their efforts, Mueller received the loudest ovation from the standing audience, while O’Neal was a close second.

Directed by playwright-in-residence James Still, the production combined an elegant stage setting with Hitchcock-inspired, close-up images projected on the upper surround of the stage and by scene-matching, suspenseful music. It was all very film noir-like.

The images, projected when a phone call was made from the desk of the apartment, featured odd angles and croppings of the person on the other end of the line, creating of subtle sense of uneasiness. Kudos to scenic designer Kate Sutton-Johnson and sound designer Lindsay Jones

However, as technology often lets us down, a glitch in the projected images occurred during one scene in which Tony received a phone call. Before he had a chance to pick up the phone, the caller’s face was projected on the upper surround and began talking. Without missing a beat, Tony picked up the phone and said, “Hello,” carrying on the conversation as scripted and as if nothing were wrong. But when the conversation was over, the ever-professional Allen went off-script and said to Margo, “That was odd.” It drew the biggest laugh of the night.

While perfect murders rarely happen in real life, neither do perfect plays. But the IRT dialed up a winning number with this one.