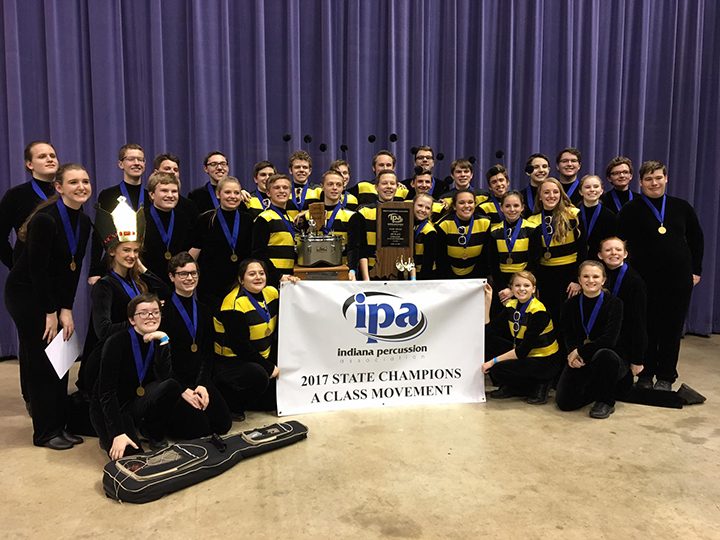 Zionsville Indoor Percussion made history by becoming the first school to win three consecutive state titles when it took the top prize at the Indiana Percussion Association Class A competition last month in Terre Haute.

This year’s show, “The Hive,” featured music from “Flight of the Bumblebee” by Rimsky-Korsakov, “Staying Alive” by the Bee Gees and “Imma Be” by the Black Eyed Peas. The group participates in two competition circuits:  IPA and Winter Guard International.

“My philosophy is to develop individual discipline through percussive studies. The students learn that if they have a strong work ethic, they can get results they want,” ZIP Director Orion Avery said. “I’m really proud of these kids.  They put in a lot of hours, a lot of hard work and effort, and when you watch the performance, it shows.”

After achieving their goal winning State this year in the IPA circuit, the group focused all of its attention on the world competition stage in late April in Dayton, Ohio.

This year, four groups represented Indiana in A-Class: Southport, Hamilton Southeastern, Carroll and Zionsville.  The remaining 60 competitors were from ensembles from across the nation.

“It’s really cool getting to know percussionists from other schools,” said junior Madison Smith. “We’re rivals in competition, but we really respect each other.  We know how much work it takes to put on these shows.  It’s great getting to know so many musicians that have the same passion for music that we do.”

After prelims, Carroll and Zionsville advanced to compete in semi-finals on Friday.  After semi’s, only Zionsville earned a chance to compete in the finals, seeded 13th out of the top 15 groups remaining. They ended the competition in 10th place.