You are at:Home»Current in Westfield»Westfield’s historic cemeteries poised for a much-needed makeover in downtown

At the Anti-Friends Slavery Cemetery outside of downtown Westfield, the times seem to be changing. The cemetery was founded in 1844 and holds the remains of Westfield pioneer Asa Bales and his wife, Susannah. Because of its historical significance, the nonprofit Indiana Cemetery Works Corp. has been renovating the site for years. 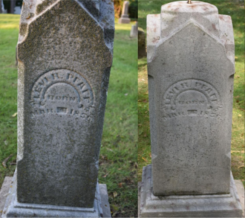 A before and after cemetery headstone. (Submitted photo)

“There’s just not a dedicated source for renovation (of cemeteries),” said Nicole Kobrowski, a chair with the organization and a Westfield resident.

“Indiana had the cheapest program nationwide. It typically was only $30 a person, just for the basic techniques,” said Kobrowski, adding the Indiana Historical Society reached saturation with attendance totals.

Kobrowski’s husband, Michael Kobrowski, also is involved with the nonprofit and its efforts.

“The need is here. There are so many people out there willing to help (with cemetery restoration),” he said.

Indiana Cemetery Works’ goal is to educate the public and organizations about proper preservation, care and maintenance of pioneer and historic cemeteries.

Nicole said work will never be fully completed, in part because of the sheer number of cemeteries in Hamilton County. A website is under construction as the Indiana Cemetery Works Corp. looks to expand its workshops as early as this summer It is an attempt to fill in the gap left by the Indiana Historical Society in 2015.

The board of directors include Michael and Nicole Kobrowski, Jodi Lewis-Becker and James Becker III.

Indiana Cemetery Works will host its first practical workshop at 11 a.m. May 7 at the Anti-Slavery Cemetery on North Union Street. Reservations can be made online at facebook.com/events/1885202648423987/