Helping people and making a difference has never been far from the mind of Westfield High School senior Drew Schmitz. He has already made several mission trips around the world, including to storm-ravaged Haiti. 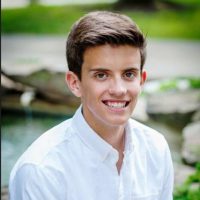 When many were away on a beach this month for spring break, Schmitz was en route to New York City.

Schmitz coordinated the trip and invited other students to join him on the New York City Relief Bus. The effort was the product of his passion for helping.

“I went on a mission trip to New York City last spring break, and I led a trip there every (spring) break with a couple fellow Shamrocks,” Schmitz said

This year’s group included 11 students from Westfield and from high schools in Noblesville and Fishers.

While in New York, Schmitz said his goal was to “just serve and love the poor and homeless of NYC by providing food, conversation, prayer and resources.”

The qualities of giving and expecting nothing in return run deep for Schmitz.

“NYCR runs most of their outreaches through an old school bus transformed into a mobile soup kitchen,” he said. “There is a serving area where we basically try to act like a food truck (and we ask what) they want instead of just giving them what we have. That allows our homeless friends to have dignity, which is huge for a group of people that are so overlooked.