You are at:Home»Current in Fishers»Which Wich adds second location in Fishers due to city growth, reaches out for fundraisers

The owners of the Which Wich in Deer Creek Shoppes in Fishers have seen such great success since opening in January 2016 that they have opened a second location on East 96th Street in the North by Northeast Shopping Center. Bhavin and Alpa Naik said a second location was needed in Fishers because of the city’s growing popularity with homebuyers. 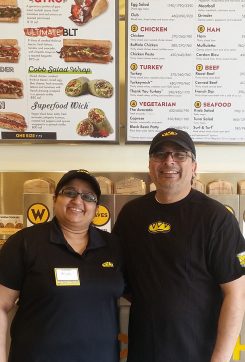 “Fishers is a growing community. You see a lot of development going on in the city,” Bhavin said. “There are people moving here all the time. I just felt the need for having a second Which Wich in the Fishers area.”

The shopping center is on the line of Indianapolis and Fishers.

“I wanted to concentrate on the Fishers location and capture the Castleton area as well. That’s why the 96th Street area jumped to mind,” Bhavin said.

The Naiks have been working with local schools to participate in fundraising events.

“They have been great franchisee partners and always want to participate in giving back to the community,” said Connie Peyton, director of franchise development for Which Wich.

The Naiks plan to do more with the community in the future, including school fundraisers.

“The northeast Indianapolis market has been a great market for the brand. Bhavin opened his first store and wanted to go ahead and capitalize on the market,” Peyton said. “We assess every market individually and determine if there will be any impact on the existing location before we go to place it. We feel like the Fishers market is now penetrated by Which Wich. Everyone there now has the opportunity to be a loyal fan.”