You are at:Home»Current in Zionsville»Caplinger’s Fresh Catch prepares to open in Whitestown 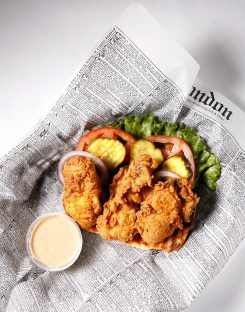 The Oyster po boy is among the offerings at Caplinger’s Fresh Catch. (Submitted photo)

“I had zero interest at this point,” he said. “I had a call with a representative for a property in Whitestown who said he had the perfect space for us. I told him I would come and see it, but again, zero interest. I was just going to educate myself on what was out there and available.”

But when Caplinger got to the property in Whitestown’s Marketplace at Anson that was previously home to Gandolfo’s Deli, he was “blown away.”

“It was going to be really easy to turn into a Caplinger’s Fresh Catch. It even had some of the colors that matched the Shadeland store and lots of other little things that made me starting thinking, ‘maybe,’” he said.

That “maybe” became a “yes” after he talked to his wife, Courtney, and dad, Nick, who also are part of the business. Caplinger wants to open the Whitestown store May 23. The 2,800-square-foot shop can seat 78 inside and another 20 in the outdoor patio area. But there’s room to add more, Caplinger said.

The menu will stay about the same as other locations. Caplinger is trying to pare it down to be more efficient during busy hours, but customer favorites such as the “lobsta” roll and the Caplinger’s Special will be available. In addition, a market with fresh fish and seafood, along with other items such as Caplinger’s smoked seafood spreads, will be available to buy and take home.

“We get deliveries every single day, so if there is something you want, then call me a day ahead. And if it is in season and available, I will bring it in the very next day,” Caplinger said.

The response to the Whitestown location has been unlike anything Caplinger could imagine, he said.

“Now that we have been around a few years and people are really starting to know who and what Caplingers is, to see the response to just the little piece of paper in the window saying it was coming soon was overwhelming in a great way,” he said. “It’s just been amazing. Everyone I have met is so excited and so nice. I’m really looking forward to it.”

As for what’s next, Caplinger said he’s in talks to possibly be a part of the project going into the old Coke plant on Massachusetts Avenue in downtown Indianapolis.

“They are putting together something pretty amazing,” he said. “It’s probably a year and a half down the road, which makes it a lot more feasible for us. So we hope that works out.”

The Whitestown Caplinger’s Fresh Catch will be open from 10 a.m. to 8 p.m. Tuesday, Wednesday and Thursday and from 10 a.m. to 9 p.m. Friday and Saturday. It will be closed on Sunday and Monday.