Larry Mayer, Jr., was a great athlete, but those who knew him well also remember him as a wonderful person. 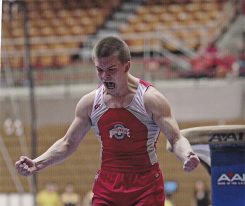 The 2011 Carmel High School graduate died April 17 in Columbus, Ohio, after being struck by a semi-truck when he exited his car after it slid off the road.

Mayer, 24, competed on the Ohio State men’s gymnastics team from 2012 to 2015. He was the state champion on floor exercise and vault in 2011, and that same year placed second in the nation in the Junior Olympics on vault. Mayer currently holds both the Ohio State and NCAA record on vault. Academically, Mayer was a two-time Academic All-Big Ten selection and three-time Ohio State Scholar-Athlete.

He was completing a sports management internship at Ohio State and had planned to begin coaching at the Indiana Gymnastic’s Center in Franklin in May.

He was a long-time member of DeVeau’s School of Gymnastics in Fishers under coaches Jeff Greene, Chad Ford and Aaron Schmitt.

Greene, a Carmel resident, coached Mayer for more than 12 years and said Mayer had a great personality and a positive attitude.

“He was just a bundle of energy. He had a huge heart,” Greene said. “He was very giving to everybody. He’s somebody everybody loved.”

Mayer will be honored during the upcoming NCAA Men’s Banquet at the NCAA Men’s National Collegiate Gymnastic Championship in West Point, N.Y.

“I am so saddened to hear about Larry’s passing.  Larry was a quiet student, but was always focused on his grades and doing well in school,” said Stephanie Payne, CHS counselor.  “He was a very resilient and hardworking individual. With the help and support of his grandparents, he was a very successful student at CHS and student-athlete at Ohio State University.”

According to Mayer’s profile on the Ohio State website, Mayer competed on the still rings, vault and parallel bars. He listed gymnastics, hunting and fishing as his favorite past times.

In two days, more than $18,000 has been raised in Mayer’s memory via a GoFundMe page for the Larry Mayer, Jr. Memorial Scholarship Fund. Donate at gofundme.com/larrymayerjr.