Ali and Kate Boice have some varied interests but share a love of being on stage. 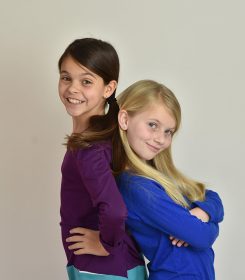 From left, Ali and Kate Boice will perform in Civic Theatre’s “The Music Man.” (Submitted photo by Julie Curry Photography)

“They had a friend participating in CYT (Christian Youth Theater) come join the class,” their mother Kristen Boice said. “Ali ended up falling in love with the class and asked to do the bigger production. So she started expressing a lot of enthusiasm being part of the process. Ali’s first role was in ‘Annie,’ where she played Sandy, the dog. Kate went to the show and expressed interest in participating.”

The Boice sisters, from Noblesville, will appear in Booth Tarkington Civic Theatre’s production of “The Music Man” April 28 through May 13 at The Tarkington in the Center for the Performing Arts in Carmel.

Kate, 9, a third-grader at Hinkle Creek Elementary, is playing in the children’s ensemble.

“I like the storyline and music, and all the dancing is just amazing,” Kate said.

“I like the songs, and choreography is awesome,” Ali said.

The sisters were previously in “Joseph and the Amazing Technicolor Dreamcoat” at Beef & Boards.

“I like acting better because it allows more thinking and concentration,” Kate said. “I still enjoying singing a lot, but I like acting a little better.”

Ali performed a year before her younger sister, who wanted to performed right away but had to wait until she got a bit older.

Kate likes crafts, golf, tennis and running with two dogs, both whippets. Ali emphasized she likes to read a lot and swim.

The first show the sisters did together was Stone Soup Musical Productions’ “Seussical, Jr.” in 2015.

Ali was the director award recipient for CYT’s “Annie, Jr.” and “Mary Poppins.” She was the 2015-16 Encore nominee for best performance under the age of 18 in a musical for her portrayal of Tiny Tim in The Belfry Theatre’s “A Christmas Carol, the Musical.”