You are at:Home»Night & Day»Entertainment News»Scharbrough stars in ‘Shrek- The Musical’ at Beef & Boards Dinner Theatre 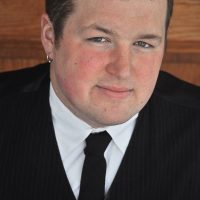 Pete Scharbrough will be faking it again when he returns to the Beef & Boards Dinner Theatre.

The actor most recently was on the B&B stage as Reuben in “Joseph and the Amazing Technical Dreamcoat,” informing his father Jacob about the “supposed” death of Jacob’s favorite son, Joseph. Leading his other 10 brothers in a facetious rendition of “One More Angel in Heaven,” Reuben’s moans of sadness were not sincere; the jealous brothers actually had sold Joseph into slavery.

Now, Scharbrough must commit the ultimate act of stage fakery by portraying a cartoon character in the lead role of “Shrek – The Musical,” May 8-July 2. It’s a challenge the 2004 graduate of Ben Davis High School embraces.

“The hardest part will be to make the character my own but still keeping him
Shrek,” said Scharbrough. “With most characters from movies like ‘Mary Poppins’ or Belle from ‘Beauty and the Beast,’ people already know who the character is.

“But for my Shrek to come across on stage, it has to come from me and my connection to the
character. It would not be as good if I just try to mimic how Mike Myers
said the lines in the movie.” 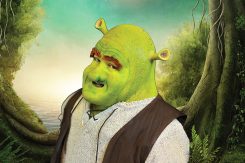 Scharbrough was referring to the 2001, Oscar-winning film in which Myers voiced Shrek. The DreamWorks computer-animated film was eventually adapted for stage and played on Broadway from 2008 to 2010, earning eight Tony Award nominations.

The story focuses on the journey of a green ogre named Shrek, a talking donkey (played by Julius Thomas III) and a princess (Emily Grace Tucker) as they attempt to return more than a dozen fairytale characters to their homeland in Durloc. Pinocchio, Peter Pan, The Three Pigs and others were previously exiled by the fairytale-hating Lord Farquadd for being freaks.

Helping to make Scharbrough’s Shrek more believable are the prosthetics and makeup he must wear for each performance.

“I just tried on the mask and makeup, and I will really need to work on my facial expressions,” he said. “Although I can move my face under it, it will not show nearly as much as my face would show without the mask.”