You are at:Home»Current in Zionsville»Cobblestone reopens with new branding, interior, menu

After a six-week remodel, Cobblestone reopened on Main Street in March with new branding, a new interior and a new menu. 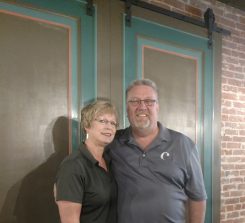 Liz and Kent Ezra pause in their remodeled restaurant. (photo by Heather Lusk)

“It was a little bit risky to close for six weeks,” said co-owner Liz Ezra, who added it’s usually a slow time of year but mild temperatures this year changed that.

“It was time,” co-owner Kent Ezra said. “It was good for us to reinvent ourselves. What we were trying to do with our menu and the type of service and food we wanted to provide, it all pointed to us remodeling.”

The contemporary look was designed by Zionsville residents and business owners Lesley Jane Hunt and Tom Casselini, who volunteered their services. Locally based Nazareth Building Services was the general contractor.

Bricks that were once an exterior wall are now exposed after being stripped of old  paint. The Ezras are love the look of the exposed brick.

“It was a game-changer,”  Liz said. “We were just thrilled.”

“It makes the space,” Kent said.

The menu has been updated with mostly new items, including shrimp and grits and flatbread.

“We’re as close to farm-to-table as I believe any restaurant you’ll find,” Kent said.

Appetizer options doubled, as did seating in the bar area. The craft cocktails and drink menu also have been revamped.

A window with shutters was added to a separate room that is often used for private parties.

“They feel more incorporated with the restaurant now,” Liz  said.