You are at:Home»Current in Westfield»Wood Wind passes plan commission and heads to city council with a 6-3 vote 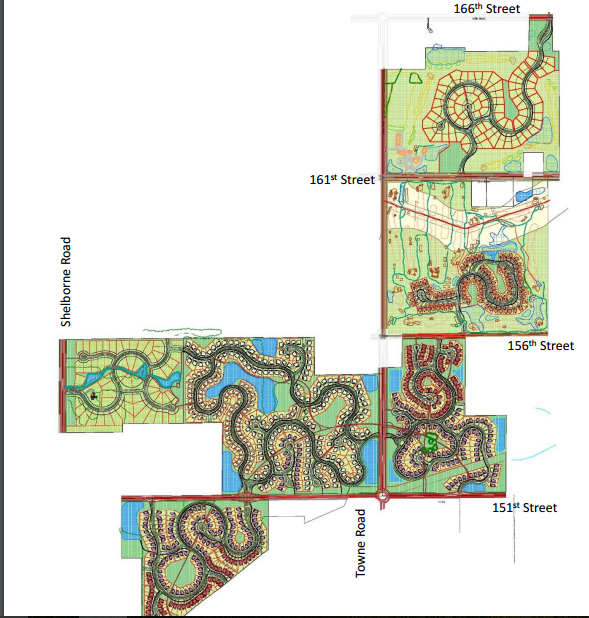 This map shows the five different areas of the Wood Wind Planned Unit Development that spans approximately 700 acres. Changes were made in multiple areas. (Submitted image)

The Wood Wind Planned Unit Development appeared again before the advisory plan commission April 17 and was approved and passed on to city council by a 6-3 vote.
Pulte Homes of Indiana requested a continuance at its March appearance, asking for more time to refile new market data and updates. The updates included reduction of homes, architectural standards, buffering updates and more.

Area 1: Changes to Area 1 of the development included removing 23 acres, an average lot area of more than .5 acres, a tree preservation area, no front garages and mostly custom homes. For the homes built by Pulte in this area, all front facades must be different. A lot density of .605 lots per acre was established.

Area 2: Minimal changes were made to Area 2. A perimeter setback consistent with Area 1 was established.

Area 4: There are modified products, reduced lot count, a perimeter setback along Towne Road and a tree preservation established.

Area 5: Has the same product modifications as Area 3 and 68 percent of all homes require side load garages.

Overall, 40 percent of homes require a 36-inch masonry wainscot around all sides of the home, and 90 percent require an 18-inch masonry wainscot around all sides. Open space was increased by 35 acres and 40 percent of the entire project is open space. Black board fence is required around 65 percent of the perimeter to allow for grand entrances and other fencing for safety reasons to be established around ponds. The average price point is more than $500,000.

The three plan commission members that voted against the development were Bob Smith, Randy Graham and Dr. Ginny Kelleher. Smith expressed concerns regarding whether the Wood Wind Golf Course truly needed Pulte Homes’ proposal to save it, and Kelleher said she has always looked at the product as a stand-alone development regardless of whether the golf course was saved or not. She expressed concern there was only one developer and one builder for the project, unlike Bridgewater which had one developer but several different builders.

Since the beginning of the proposal process, Pulte Homes has nixed the multi-family and commercial developments originally proposed.

Steve Hoover, who also serves on the city council, voted in favor of the project.

“I have been an elected official for eight years, and I have never once done anything that I did not think was in the best interest of Westfield as a community,” he said. “I have worked extremely hard on this process, and whether the golf course was saved or not, I believe that this is, as proposed today, in the best interest of the (community) for many, many reasons.”