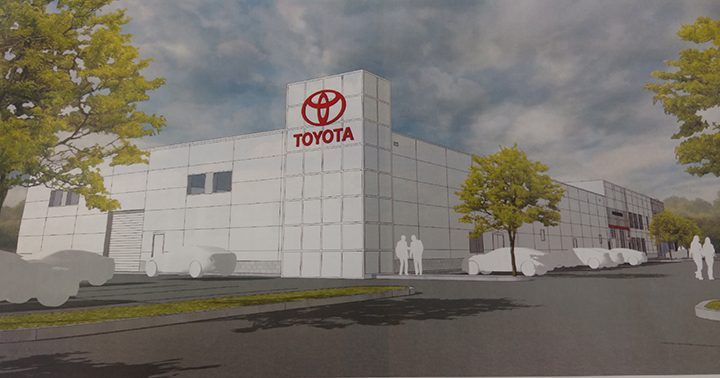 The Zionsville Plan Commission on April 17 unanimously approved a development plan for a Tom Wood Toyota dealership on 9.8 acres at 6408 Crane Dr., south of Cracker Barrel and just east of I-65.

Last month the commission delayed a vote on the project to allow time to gather more information. Commissioner Larry Jones said he was still not satisfied with the updated plans, which include changes to landscaping, drainage and the relocation of a dumpster.

Jones said residents in the nearby Royal Run neighborhood might be upset if they learned that the dumpster had been moved from the plans originally presented. He expressed concern about the noise generated on trash pickup day.

“Dumpsters are the small kind of items that are a big irritant to the adjoining residents but a small portion of what you’re trying to do,” he said. “We’re looking out for the residents.”

Paul Kite, speaking on behalf of petitioner John Wood of Zionswood, LLC, said that the dealership is not seeking any variances or asking to do anything outside of the norm.

“A certain amount of noise is to be expected,” Kite said. “We’re not having any outdoor music or an outdoor PA (system). It’s just a business operating on a GB-zoned piece of property.”

He also said that the dealership hopes to be open by the end of the year for “competitive reasons.”

“The Tom Wood organization wants this done as soon as possible. Now that they’ve committed to make the move, it needs to get going,” Kite stated in an email. “We want to make sure we’re among the first to service this area. I’m not certain who might be looking other than I’ve heard that other land owners have been approached recently.”

Jones joined the other commissioners to approve the plans along with a set of commitments that include keeping a tree line on the north side of CR 650 S, permanent removal of a portion of CR 650 S and installation of a new curb, no exterior paging or speaker system and the reorientation of the dumpster.