You are at:Home»Current in Carmel»Carmel Community»Opinion: Finding my forever home – A rescue dog’s tale

Commentary by Julie Osborne and Toto, the dog 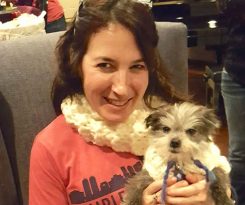 It was cold. My paws felt frozen to the cement patio even though 16 of us were jammed together for warmth. Summer was the opposite — unbearably hot. It smelled bad too. My favorite time was mealtime, although my “friends” would squeeze me out and I often got trampled. My six pounds could not compete with their 60, but I never gave up. Barking became my specialty. My vertical jump wasn’t bad either. Anything to help me get attention was worth it — otherwise, I would remain cold and hungry.

One fall day, everything changed. People in uniforms arrived at the house, and we were taken to a place called 4 Precious Paws Rescue. The people were nice and gave us food, toys, and lots of love. It was wonderful — except for the shots and the big pills, that is. I didn’t like waking up with my private parts missing either! But I felt safe.

Not long after all the shots and medicine, we were moved again but this time ended up in a place with tons of dog stuff. I was nervous as people picked me up. But as one woman cradled me in her arms, my worries began to drift away. As I looked up, I liked the smile glancing back at me along with her comforting words. There was another stranger, too, who she called her daughter. When they found out my name was Toto, the daughter exclaimed, “Looks like you found your dog, Mom!”

Toto before and after being adopted. (Submitted photo)

That was five months ago, and today I couldn’t be happier. Sure, I still have a lot to learn, but I feel loved like I have never felt before. And the cuddling …well, it never stops.

What started on a cold patio ended on a lap — Oz’s lap. And, as I look up at her eyes now, I know that the journey of Toto and Oz has just begun!

Toto and Julie Osborne (aka “Oz”) met unexpectedly when Toto was rescued from a hoarding situation after being mistreated and malnourished. You can follow their journey at julieosborne.com– Tales of Oz with Julie Osborne (and Toto too!)”