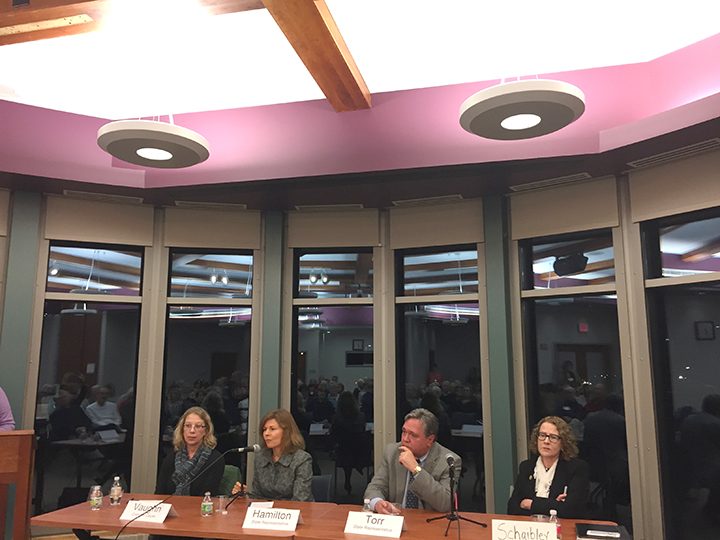 The League of Women Voters of Indiana recently hosted a panel discussion at the Carmel Clay Public Library to discuss redistricting reform and the impact of gerrymandering on the voting process.

The panel was comprised of three state representatives, Democrat Carey Hamilton of District 87 and Republicans Donna Schaibley of District 24 and Jerry Torr of District 39, who joined Common Cause Indiana policy director Julia Vaughn to speak on the issues and take questions from some of the 50-plus people in attendance.

Torr had proposed House Bill 1014, which would establish an independent redistricting commission to eliminate gerrymandering. Rep. Milo Smith (R-Columbus), the chairman of the Indiana House Elections and Apportionment Committee, blocked a vote on the bill.

“We’re looking for a balance that will bring bipartisanship to the redistricting process that can become law,” Torr said, regarding necessary changes to HB1014. “That’s a very important component of this.”

In addition to Torr’s efforts, Vaughn and Common Cause have worked with the League of Women Voters of Indiana to form the Indiana Coalition for Independent Redistricting Reform, with the vision of a diverse group of Indiana citizens tasked to draw both legislative and congressional districts.

“We think this is important, because as Sen. Torr pointed out, democrats gerrymandered, too, when they had the majority,” Vaughn said. “That’s what political parties do. As long as it’s going to be a political party, the party in control will gerrymander.”

While Vaughn doesn’t believe redistricting reform has the power to turn a red state blue, she believes it will make an impact on the political system.

“I think we could expect a redistricting process that is done more by citizens outside of the legislative process,” Vaughn said. “It’s a conflict of interest as long as the players also get to be the umpires.”