At 79, the idea of leaving his Southern California home doesn’t appeal to jazz musician Charles Lloyd much. 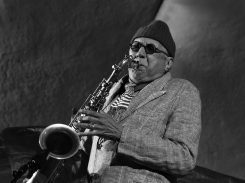 Charles Lloyd & the Marvels will appear at 7:30 p.m. April 20 at the Palladium. (Submitted photo)

“I am a homebody and extremely resistant to leave the house,” the legendary saxophonist said. “Once we get in the car and head to the airport, I let go, and the idea of a new chance to make music is a thrill.”

Charles Lloyd & the Marvels will make a Carmel stop on their latest tour, playing at the Palladium at 7:30 p.m. April 20.

“Every time I walk on stage it’s another chance to try and tell the truth,” Lloyd said. “I have been trying to do that all my life. Fifty-plus years later, I am still doing that — searching for the sound. When I walk on stage, the whole of my life’s experience walks on with me. I find that the longer I live the more I have to give. Am I going out and playing oldies, but goldies? There might be a couple of familiar songs, but I am looking for fresh flowers in the forest of sound before me.”

“It was an honor to have the wonderful contribution from Willie Nelson on ‘Last Night I had the Strangest Dream,’” Lloyd said. “I used to listen to his album ‘Stardust’ when I lived in Big Sur, and I knew we had a simpatico. The weary depth of his voice and life experience is poignantly on that track. Over the years I have heard Norah Jones singing in my mind’s ear on ‘You Are So Beautiful.’ The timing was right in both of our schedules for her to lend her soulful and sultry voice to the song. I was very happy about that.”

Lloyd’s said the Marvels is a special formation that keeps expanding in scope and dimension.

“I have been having a great time on stage and off with this group of musicians, it’s a beautiful thing that after you discover you can make great music together, you find (yourself) keeping friendship,” Lloyd said. “Eric Harland has been playing with me for 15 years now. He is the youngest in the group but has senior status. Reuben Rogers has been with me for 13 years. Bill Frisell and Greg Leisz are the newcomers, they have been with me since 2013.”

Lloyd has been invited to record with bands like The Doors, The Byrds, The Beach Boys and sharing billing with Jimi Hendrix, Janis Joplin and The Grateful Dead, among others.