You are at:Home»Current in Carmel»Carmel Community»Xavier guard arrested in Carmel for marijuana possession

Trevon N. Bluiett, a junior guard for the Xavier University men’s basketball team, was arrested in Carmel on April 10 for possession of marijuana. 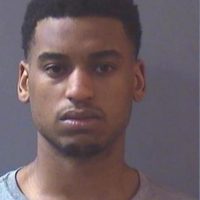 According to information from the Carmel Police Dept., at approximately 3:30 p.m., officers observed a 2003 silver Chevrolet Impala heading southbound on U.S. 31 near 136th Street traveling approximately 75 miles per hour in a zone where the posted speed limit is 55 miles per hour.

CPD stopped the Impala, driven by Bluiett, 22, on the U.S. 31 and Carmel Drive overpass. During the traffic stop, police observed a strong odor of marijuana coming from the Impala. After investigating, police arrested Bluiett for possession of marijuana less than 30 grams, a Class-B misdemeanor.

Police transported Bluiett to the Hamilton County Jail for processing. His bond was set at $1,000.

Bluiett is an Indianapolis resident who played high school basketball at Park Tudor where he broke the school scoring record.