When is the last time you did something for the first time? 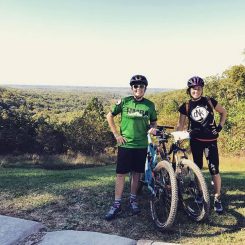 Danielle and Kate are wilderness guides, certified mountain bike instructors, and Leave No Trace trainers, among several other certifications. They have guided countless trips in and outside of Indiana. DNK Presents provides people with the opportunity and means to explore nature and try something new.

“We have a love of adventure and we want to get people back outside,” Danielle said. “Our mission is to get people to try something for the first time, step outside their comfort zone and in turn gain confidence and empowerment through experiential learning and adventure.”

DNK Presents offers trips for men and women but specializes in all-female adventures. According to Danielle, many women were coming on the trips and having big breakthrough moments while challenging themselves.

“The women who were originally hesitant to come on these trips were the ones having more periods of growth,” Danielle said.

Danielle and Kate decided to offer a trip specifically for women who would not typically sign up for a trip on their own. In the spring of 2016, DNK Presents hosted its inaugural women’s adventure contest in Indiana. Women had to be nominated by someone. Danielle said in a short amount of time, more than 60 nominations came in. Four women were chosen for a four-day customized adventure guided by DNK Presents.

Four women were chosen to win a four-day customized adventure guided by DNK Presents. These women were outfitted with gear like Salomon boots from Rusted Moon Outfitters, Bontrager bike shirts and helmets from Trek Bicycle Co. and clothing from Athleta. All of the food and equipment was provided. The women were required to leave all technology behind.

“We took away their cellphones. They were totally unplugged,” Danielle said. “You disconnect from technology but you reconnect with yourself.”

The women backpacked along the rugged Tecumseh trail, practiced yoga and paddle-boarded on Yellowwood Lake. They participated in a mountain bike clinic and had many “surprises” along the way, Danielle said.

Danielle and Kate had been photographing and filming some of their previous adventures and found that women were especially inspired by the videos. Through research, they also found that female-centric adventure documentaries were few. They decided to hire 12 Stars Media and freelance film editor Matt Panfil to film this adventure. Roberts Camera donated rental GoPro cameras for each of the contestants.

The “Live Adventurously” film was made over the course of the weekend trip. The film follows the transformational journey of the four women throughout the weekend.

“Live Adventurously” premieres April 14 at the Indianapolis Museum of Art, in its outdoor amphitheater. In case of inclement weather, it will be in the Toby Theater. The doors open for VIP ticket-holders at 7 p.m.. The film starts at 8 p.m. Drinks will be provided by Big Woods Brewing Company. Pizza from Hot Box Pizza will be served. Trek Bicycle Co. and Rusted Moon Outfitters will have tents at the premier, and outdoor gear will be raffled off.

The film was also nominated for Best Documentary and Best Cinematography at the Alhambra Theatre Film Festival in Evansville.